R.W. Hoyle - The Pilgrimage of Grace and the politics of the 1530s 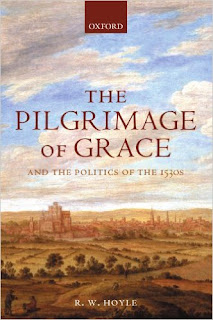 In my review of Geoffrey Moorhouse' book The Pilgrimage of Grace I sketched out the rough history  of the Lincolnshire Rebellion and the Pilgrimage that make up the subject matter of both these books. In this review of Hoyle's book I want to concentrate on the authors discussion of the nature of the rebellion itself.

Hoyle is a master of his sources. Not only has he re-examined the original material but he has a commanding understanding of it. Thus he re-examines much of the contemporary letters and accounts to try to understand the social forces that led to both uprisings. His conclusion is at odds with many historical accounts of the Pilgrimage of Grace. Traditionally it has been seen as a rebellion of the gentry, leading the commons in a conservative attempt to roll back Henry VIII's reformation, defend the monasteries and reassert traditional religious values.

However, Hoyle argues that while some of this is true, at the heart of the rebellion were wider issues that made this an uprising of the commons, in particular the rural masses. But the commons felt they needed the gentry, in part because they lacked a coherent set of demands, but also because they felt that their rebellion was about wider society and the gentry were part of that society.


In the first instance the commons were a crowd, thrilled by the excitement of being gathered together in large numbers, determined that anyone who opposed them should be intimidated into submission... but unclear about tactics. At Louth, perhaps at Horncastle, certainly at Richmond, we see a struggle for control between the original agitators responsible for calling the rebels together and the gentry whom they brought to their musters and whom, in large measure they probably mistrusted. The gentry shaped the revolt by offering it discipline. They changed the composition of the commons by insisting that only a small number drawn from each township or parish went forwards and represented the whole.

Mostly the gentry tried to hold back and disperse the rebellion, in part by delaying tactics, in part by trying to petition the king for pardons and demands that would allow the ruling class to disperse the movement. The king failed to respond in kind, and this led to a major problem for the gentry who were closely associated with the rebellions. In fact, many of the gentry lost their lives as a result of Henry VIII's paranoia. He couldn't see that the gentry were forced into a leadership position by the commons, and had actually tried to undermine the rebellion. Their professions of loyalty during and after the rebellion were rarely enough to save them.

A second key aspect to Hoyle's analysis is that he sees the Pilgrimage of Grace as being different depending on its region. The East Riding rebellion was very much associated with the demands of the Lincolnshire rebels, particularly because of the role of Robert Aske. But the revolt that took place between Ripon and Richmond, spread in the name of "Captain Poverty", "was concerned with agrarian discontents, with tenure, fines and thithes, as well as the suppression of the smaller monasteries and the defence of the church". This is absent in the risings in East Riding.

Because Henry VIII failed to grasp the independent nature of the commons within the Pilgrimage of Grace he found it increasingly difficult to subdue it. The Pilgrims wanted a "dialogue" from their Prince, the King however wanted an end to their rebellion. At the same time, Henry made a series of tactical mistakes in mustering his forces. Had either the Lincolnshire rebels or the Pilgrims challenged the Royal armies in open battle, they may well have won and Henry's position would have been extremely difficult. That the rebels were dispersed is in no small part due to the tactics of the gentry themselves who suceeded where Henry had failed. Aske in particular was able to "sweet talk" the commons into disbanding based on the concessions he felt he had won. In fact these were non-existent and the King had no intention of honouring any pledges, in particular the promise of a parliament.


He [duke of Norfolk] had struck a deal with the leadership of the Pilgrims which they found sufficiently satisfactory to persuade them to disband their movement. The deal relieved them from the threat which the commons posed to them, their families, and property. There could be general satisfaction that a device had been found which allowed the commons to return home with honour. The question which cannot really be answered is how many of the gentry were actually committed to the agreement except as a cynical exercise to disperse the Pilgrims.

Henry VIII was lucky to have such loyalists around him. Their flexibility should have been rewarded. Instead, in many cases, it lead to the executioners bloc.

Hoyle's excellent history of the Pilgrimage of Grace should be read by every student of the subject. It might be seen as revisionist for its attempt to portray the rebellion as larger, wider and more in depth that previously described, but that only serves to underlines its importance as a work of history.

Moorhouse - The Pilgrimage of Grace
Posted by Resolute Reader at 5:43 pm