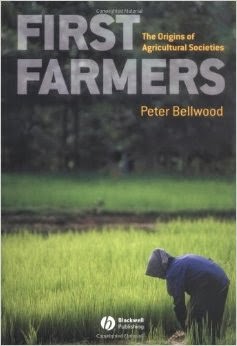 The historical development of agriculture fundamentally transformed human societies. The surplus generated by farming could, for the first time in human history, allow groups within society to live from the labour of others. Thus, where, when and why agriculture developed and was taken up is of enormous interest to those trying to understand subsequent history.

Peter Bellwood's book on the Origin of Agricultural Societies is thus very important. He begins by exploring why certain hunter-gatherer communities became agricultural, and why many didn't. A key question is whether once agriculture had developed at various "points of origin" around the globe, it spread wave like, carried by the outward movement and spread of agriculturalists, or whether it was adopted by existing hunter-gatherer communities who then became sedentary.

Many societies didn't take up agriculture, and the encounters between the two types of early communities may often have been mutually beneficial. Though, as Bellwood explains, at a certain point the situation would become untenable. "Such interactive networks between farmers and hunter-gatherers, in situation of non-severe circumscription, are presumably stable until the farmers increase their numbers... and thus require more land. Then, the hunter-gatherers either join the farmers as an underclass of field workers, or, if they are lucky, they can adopt agriculture."

Bellwood points out that those missing the agricultural "train" can have a bleak future. But, as the author explains, "the ethnographic record with respect to ... hunter-gatherer societies offers few hints of eager and successful agricultural adoption. This seems to be the case regardless of whether societies were immediate or delayed return, encapsulated or unenclosed, ranked or egalitarian, sedentary or mobile, 'collectors' or 'foragers'."

Much of the earlier chapters of this book discuss exactly how and why agriculture was invented and developed. Bellwood gives an excellent over-view of the different transformations across the whole world. Looking at the different plants and animals that are domesticated around the world, and examining, in turn, the archaeological, genetic and linguistic evidence builds up a picture of how agriculture was invented and spread.

Some of this research really fascinating. The author cites one study that demonstrates that "domestication [of grain] could be achieved within 20-30 years if the crop is harvested near-ripe by sickle-reaping or uprooting, and if it is sown on virgin land every year [with seed] taken from last year's new plots".

This implies that agriculture could have developed very quickly, though other studies noted point out that "wild and domesticated cereals occurred together for over a millennium before the latter became fully dominant". Hindsight plays an important role, but we can see that agriculture wouldn't have necessarily taken hundreds of years. Incidentally, the importance of sickle-reaping or uprooting is that harvesting plants like this, self-selects for the ones least likely to "burst" and deposit their seeds on the ground. It is a wonderful example of how the invention of a labour saving tool can have unexpected effects.

While this is fascinating, and Bellwood explains some difficult concepts well, much of the book is inaccessible to the non-specialist reader. Like David W. Anthony's book The Horse, The Wheel and Language, (an author cited often in Bellwood's work), the concepts of language evolution and spread are particularly difficult. In part this is because of the encyclopedic nature of the work, covering every part of the globe for thousands of years of history. But nonetheless the target audience is clearly students and academics rather than the popular reader. While even the most complex chapters have nuggets of information that will fascinate the persevering reader, this is probably a book that most readers will struggle with, which is a shame as the subject matter is historically of the greatest importance.