John Merriman - Massacre: The Life & Death of the Paris Commune of 1871 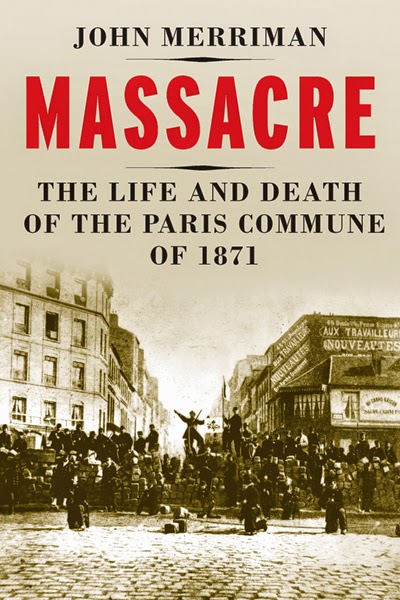 The 1871 Paris Commune represented a new stage in working class struggle. For the first time ordinary people had taken control of a city and attempted to govern it in their interests, rather than those of the rich. The Commune inspired many, including Karl Marx, who wrote:

"When the Paris Commune took the management of the revolution in its own hands; when plain working men for the first time dared to infringe upon the governmental privilege of their “natural superiors,” and, under circumstances of unexampled difficulty, performed it at salaries the highest of which barely amounted to one-fifth of what, according to high scientific authority, is the minimum required for a secretary to a certain metropolitan school-board – the old world writhed in convulsions of rage at the sight of the Red Flag, the symbol of the Republic of Labor, floating over the Hôtel de Ville."

It is because of this "rage" that the Commune had to be smashed and its participants wiped from the face of the earth.

John Merriman's new book on the Commune concentrates on the suppression of this radical experiment in workers' democracy. I was disappointed by how little of his book looks at the Commune and its radical attempts to build democracy, to experiment with new forms of organisation and to try to implement socialist ideas. Merriman also fails to understand the significance of the Commune for those future socialists, like Karl Marx, who took from it a greater understanding of the role of the state in class society, and the need to smash it and build a new worker's state.

That said, Merriman does give us a sense of some of the heights to which the Communards aspired:

"The Commune gave women in the Union des Pemmes, which included at least 1,000 and perhaps as many as 2,000 women, unprecedented public responsibilities, but the response was not all positive... Yet without question women made essential contributions to the Commune, denouncing the clergy at club gathering, encouraging the military defence of Paris, and caring for wounded Communard fighters."

As Merriman himself shows later, they also played a central role in the military defence of the city, paying with their lives for this crime against bourgeois femininity.

"In addition to reorganising Paris's workers, the Commune also endeavoured to improve their working conditions. The abolition of night baking by a decree... was one such concrete social measure in the interest of labour taken by the Commune."

Merriman notes also that there were limitations to what could be achieved. After all the Commune was triumphant in only one city, and that had taken the revolutionary leadership by surprise. Without time to condense into a unified political leadership, there were divisions and disagreements. He points out, "it is not surprising that no full-fledged attempt to transform the economy took place".

But most of Merriman's book concentrates on the violent repression of the Communards. The bourgeois classes by and large fled the city to Versailles, taking with them all sorts of rumours and myths about what was taking place in the city. What shines through is the terror of the ruling class in the face of workers uprisings, their fear of international revolution and their hatred of those at the bottom of society. Merriman has mined the memoirs, police records, diaries and books of the time to bring us the authentic voice of the Commune, and its enemies, and it is terrifying.

The largest failing of the Commune was perhaps its failure to organise a proper military defence of the city. Spreading the Revolution may well have been possible had the city been able to resist the thousands of enemy troops. But once the soldiers entered the city, and the artilary was pounding it, there it was only a matter of time before defeat would take place. Yet the military strategy was inadequate, despite the mass involvement of Parisian workers in the defence of their city.

And the revenge was brutal. The army of Thiers swept through, massacring men, women and children. No pleading was enough. The insane propoganda of Communard women armed with petrol bombs meant that everyone was seen as the enemy. Having grey hair was enough to have you targetted as a revolutionary from 1848, having dirty hands meant you must have fired a gun or built a barricade. Looking askance at a soldier was enough to led to summary execution. Merriman dwells on this in excruiciating detail, not to glorfy the violence, but because he is trying to show the scale of the violence and its rabid nature. A couple of examples will suffice,

"The Versaillais often killed Communard insurgents they discovered, regardless of whether the fighters put up any resistance. On rue Sint-Honore, line soldiers found 30 national guardsmen hiding in a print shop. They had thrown away their weapons and hurriedly put on work clothes, but that would not save them. The soldiers took them... and shot them in the enormous ditch in front of what was left of the barricade. Nearby... troops came upon six men and a young woman in National Guard uniforms hiding in barrels. They were thrown into a ditch and killed."

But wearing a uniform or having a gun wasn't the only reason to be killed. Being Polish, or having a unusual surname, or the wrong accent, or a left wing newspaper in the house was enough.

"Three women were gunned down because the Versaillais came across several pairs of National Guardsman's trousers in their apartment. A furrier on rue des Partyrs allegedly was summarily executed because he had invite Pyat to his apartment six months earlier. When the man's wife protested he was also killed. On place du Trone, soldiers saw light in an upper apartment and went up to find two elderly men drinking tea. They were shot for no reason... Social class did them in."

There was barely any attempt at trial or justice, summary executions were the way that "order" was restored to Paris. As many as 17,000 died like this, but some "estimates have reached as high as 35,000". Certainly a census the next year suggested that tens of thousands of workers had died or fled the city, half of the 1866 shoemakers were not to be found, 10,000 of 30,000 tailors were missing, 6,000 of 20,000 cabinent makers gone, and so on.

The bourgeois revelled in the violence. Le Figaro cheered the "General enterprise of sweeping Paris clean", the New York Herald called for "no cessation of summary judgment and summary execution... Root them out, destroy them utterly, M. Thiers, if you would save France. No mistaken humanity."

Which such voices against them, the isolated Communards had no chance. Indeed that they only killed 66 or 68 hostages seems of little matter to the right-wingers determined to protect their property and their political system.

Merriman's book is not easy. At times I was near tears at the counter-revolutionary brutality. But it is an important work that demonstrates the extent to which a ruling class will be prepared to kill those who threaten its existence. The Paris Commune remains an inspiration because it teaches us that workers can take power and govern their lives. But it also teachs us that we cannot half make a revolution, we must overthrow the capitalists and smash their state. Least they will take the revenge they did on the Communards.

Marx - The Civil War in France
Gluckstein - The Paris Commune: A Revolution in Democracy
Posted by Resolute Reader at 11:38 am