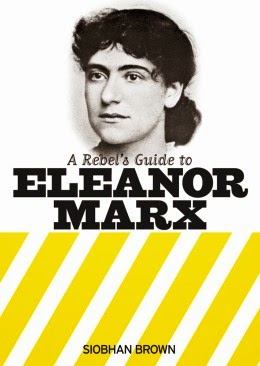 Eleanor Marx's was one of the great socialist activists. She built unions, fought for women's liberation, was active in building solidarity with international struggles from the Paris Commune and Ireland to the anti-imperialist war in Sudan. A translator, a writer, an orator and an outstanding Marxist she ought to be one of the British left's greatest heroes. Yet all too often she is forgotten. Siobhan Brown's book, the latest in the excellent Rebel's Guides series, is a superb introduction to Eleanor Marx's life.

Brown packs an enormous amount in. From Eleanor's early life in the Marx household, to the years of solidarity work with refugees from the Paris Commune to the "busiest decade". The 1880s when Eleanor Marx helped build socialist organisation, wrote a highly important pamphlet on the "woman question", toured the US to argue for socialism and most importantly put herself at the heart of the mass strike waves that ushered in New Unionism.

We get a sense of Eleanor Marx as a thinker, and not just an activist. While touring the US, Eleanor made clear her absolute solidarity with the anarchists being framed for the Haymarket Bombing, but did not hide from comradely criticism. The pamphlet that she wrote with Edward Aveling, The Woman Question from a Socialist Point of View was more than an argument for equality. It was, says Brown, "a critique of capitalism as a system that places an extra burden on women, and working class women in particular, and that distorts relationships and sexuality."

"She [Eleanor Marx] argued that while bourgeois women were competing with bourgeois men, working class women were not held down by working class men. She asserted that their interests lie together. Eleanor quotes Zetkin: 'And that is why the working woman cannot be like the bourgeois woman who has to fight against the man of her own class... With the proletarian women, on the contrary, it is a struggle of the women with the man of her own class against the capitalist class'."

Perhaps the most powerful part of these books are the sections on Eleanor Marx's involvement with the mass unions and strike waves that shook the country at the end of the 1880s. Brown points out that the workers involved in these, from Jewish tailors, to the Match Girls and the Dockers were often considered unorganisable. The tailors were in small workshops, the Match Girls considered easily replaceable, and the Dockers casualised and atomised. Yet all of these led powerful strikes that won significant victories and built powerful unions.

Brown gives us a flavour of Eleanor Marx's centrality to the new unions.

"As well as jumping on tables at meetings, Eleanor committed herself to the more mundane tasks that were required. Ben Tillett, a New Union leader, described how she did 'the drudgery of clerical work as well as more responsible duties', while Tom Mann said she was someone who, 'possessing a complete mastery of economics... was able, alike in conversation and on a public platform, to hold her own with the best."

The decline of the strike wave and union movement undoubtedly hit Eleanor Marx hard, and she committed suicide in 1898. But her legacy was tremendously important. Siobhan Bown ends her book by making the point that what Eleanor Marx demonstrated was that the best way to fight low pay, racism and women's oppression was through mass working class movements that challenged capitalism. But that ultimately capitalism had to be overthrown. This wonderful little book is a great way for activists, new and old, to learn the lessons of the past and be inspired for the struggles of the future.

Reviews of other books in the Rebel's Guide series, all published by Bookmarks