Brian Richardson (ed) - Say It Loud! Marxism and the Fight Against Racism 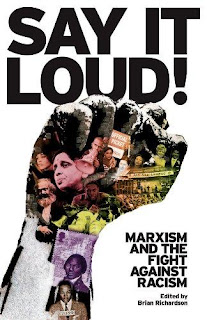 This collection of essays is an extremely important contribution to our understanding of racism, and a powerful tool for those trying to learn how best to fight racism and fascism today. The authors are all activists in the socialist and anti-racist movements in the UK and the essays are clear and easily readable. The book also has some powerful and inspiring photos of the history of British anti-racists struggles.

It would not be possible to cover all the different essays in this review. Instead I intend to concentrate on a few of them, but this is not to diminish the importance of the others. For those interested in finding out more, Socialist Worker has published some extracts, but I encourage readers to purchase the book, read it and discuss it further.

In his opening essay, journalist Ken Olende, examines the roots of racism. Marxists do not argue that racism is natural, instead the origins of racism can be located at a particular point in the development of capitalism. The mid-Atlantic slave trade of the 17th century onwards. After briefly demonstrating that "scientifically, race is a meaningless concept", Olende points out that before mid-Atlantic slave trade, there had been no systematic belief that people with darker skins were somehow inferior to white Europeans.

But racism arose as part of the need by the capitalists to justify slavery. It had enormous consequences for them. As the American Marxist Hubert Harrison wrote in 1911:


to the credit of our common human nature, it was found necessary to reconcile the public mind to the system of slavery. This was effected by building up the belief that the slaves were not really human: that they belonged to a different order of beings... One broad, general implication of this belief seems to be the denial of social, political and economic justice to all people not white.

Racism did not arise out of a great ruling class conspiracy. it was linked to wider social struggles, in particular, Olende argues, the joint struggles between black and white people at the bottom of American society in the 17th century. He writes that the:

Planter's fears of solidarity among the lower classes were a key factor that encouraged them to aggressively push a racist agenda. They were obsessed with effective exploitation. Race only became an issue where it complement their needs.


The introduction of racism against black people, firstly by the slave owning plantocracy and then by the wider capitalist class was not automatic. White people in Britain, as well as elsewhere were often at the forefront of struggles to protect escaped slaves, or indeed the emerging abolitionist movement. Olende also shows how the struggles of the slaves themselves were also crucial to ending slavery.

But since slavery ended racism has continued. This is because it plays a specific role in capitalist society. In particular it divides the working class. In her brilliant essay on How do we fight Racism today? Esme Choonara points out that studies have shown that were racism exists, both black and white workers suffer. This contradicts those who believe that white people benefit from racism. She quotes a study by sociologist Al Syzmanski who looked at the position of black and white workers in 50 states of America. He

Racism however is not static. After Slavery, it was consolidated through Empire, when Britain and other countries needed to justify their actions in the rest of the world. The rhetoric changed - instead of talking about sub-human people who could be enslaved, the populations of India or elsewhere were described as uneducated, unable to build civilisation and in need of European technology, intelligence and skills to develop. Instead their countries were pillaged in the interests of capitalism.

Racism, and racist rhetoric continues to develop. A number of essays in this book, in particular the very useful study of the development of Islamophobia by Talat Ahmed, look at how this has taken place in recent years. In 21st century Britain, racism is aimed at many different groups of people, but at its sharpest point, racist language and discrimination is used against the whole Muslim population in an attempt to divide and rule. Ahmed argues that this is a result of 30 years of demonisation of the Islamic world, by an imperialist system that needs to justify its actions around the globe. She traces the development of this rhetoric, from the Salman Rushdie affair in Britain, through the First Gulf War and more recently the aftermath of 9/11.

This is not to say that things have simply got worse. In fact in Britain, as several authors point out, mass anti-racist and anti-fascist movements have at times held back and defeated the growth of wider racist forces. Weyman Bennett's article on the way that socialists have worked with wider forces to break Nazi organisations in the 1970s and 1990s in the UK is very important. Hassan Mahamdallie looks in detail at the way the Family of murdered teenager Stephen Lawrence helped create a mass campaign that challenged racism in British society, particularly inside the police force. Editor Brian Richardson looks at the sad outcomes to this, as successive governments, particularly Labour ones undermined and blunted the work of that movement.

The final essay in this book by Esme Choonara is a reiteration of the importance of Marxism to struggles against racism today. She argues that racism originates within capitalism and is constantly renewed by it. She also points out how any understanding based on hierarchies of oppression, or notions that all white people are oppressors can only weaken the struggle against oppression. For instance, she quotes Guardian columnist Ally Fogg who, writing about the oppression of women "suggests that maybe we should stop saying that women are underpaid by 20 percent in the workforce and consider instead that men are 20 percent overpaid."

Such arguments will do nothing to unify a working class movement in the face of sexism. Similar arguments that suggest that white workers benefit from racism do not help create unity. Nor do they advance a wider critique of capitalism which uses oppression to divide those who have the power to challenge a system of exploitation and profit.

One of the themes of this book is that when ordinary people get together, as they did in the 17th century, or in the abolition movements, or in the struggles in the United States in the 1960s, or more recently in the UK, they can both challenge racism and radically transform people's ideas. Having a core of activists who understand the roots of racism and the way to defeat the system that breeds it, can make an enormous difference. This excellent book is a powerful weapon in bringing that about.

Fryer - Staying Power: The History of Black People in Britain
Snowden - Before Color Prejudice: The Ancient View of Blacks
Aspden - The Hounding of David Oluwale
Paxton - The Anatomy of Fascism
Hirsch - In the Shadow of Enoch Powell
Posted by Resolute Reader at 6:42 pm