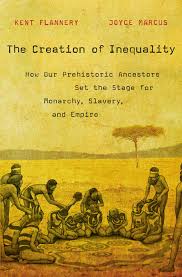 Subtitled How Our Prehistoric Ancestors set the Stage for Monarchy, Slavery and Empire this is a very important, and extremely well researched book that traces the development of human society from egalitarian hunter-gatherers to class divided, unequal societies like monarchies.

The authors argue that the first human societies where ones dominated by generosity, sharing and altruism. These societies also hand numerous internal checks to try and protect that egalitarian nature. For instance, both Eskimo and !Kung people have been shown to have used marked hunting arrows to determine who killed an animal. But the !Kung mixed up these arrows so no one really knew who had been the successful hunter. These two societies, and many other hunter-gatherer communities used ridicule and humour to downplay success and prevent anyone gaining a position above others. While successful hunters were cherished, they were expected to downplay their skills and share the fruits of their victories.

Flannery and Marcus have tried not to use studies of contemporary hunter-gatherers. Understanding that almost all of these groups are now changed by their contact with globalised capitalism, the authors instead have looked at records from the earliest encounters with hunter-gatherers. They then attempt to look at historical evidence for similar behaviour in the past. In fact, the greatest strength of this book is its rigorous attempt to find evidence for all aspects of the author's theories at different stages of human history and in different places.

As hunter-gatherers developed technology and skills, their social organisation developed as well. With the development of clan based societies, it was possible for inequality to appear. At first this was simply the difference between someone who had skills or experience over those who didn't. But with the rise of agriculture, the ability to store surplus food meant that "Big Men" could arise who could give others food. In time, some of these people, or even whole lineages could crystallise out into a wider class.

The authors then explore how these early unequal societies might become monarchies or other types of stratified groups, discussing how groups learn from each other, destroy each other, or even revert back to different social organisations.

This is a very important book, and I encourage everyone who has an interest in early human societies to read it. This review deliberately doesn't do the book, or the authors justice as I have written a more detailed and lengthier review for elsewhere.

My extended review of this book for the International Socialism Journal 140 can be read here.

Stringer - Homo Britannicus
Leacock - Myths of Male Dominance
Engels - Origin of the Family, Private Property and the State
Posted by Resolute Reader at 11:42 am