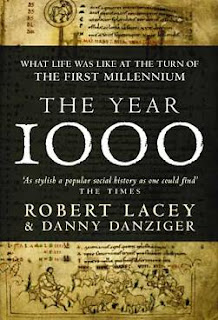 There are an enormous number of differences between the years M and MM in the British Isles. Many of these are of course technological. Ploughs in the year 1000 were predominately wood. Labour in the fields was done by men and women, occasionally they had animals too. Diets were worse, mostly because of the difficulty of storing food and shortages caused by bad harvests, though there were other differences - many foods such as sugar, spinach, tomatoes and potatoes had yet to reach these shores.

In some ways though, these differences are only superficial. They are the result of the exploration, scientific discovery and history of the next thousand years. Vastly more important and more interesting are the more subtle social differences.

Lacey and Danziger's book of popular history is surprisingly interesting in this regard. It takes as its starting point a little known document from around 1020. The Julius Work Calendar (see image here) was probably produced around 1020 CE in Canterbury Cathedral. It is a monthly documentation of the saints days and festivals, principal activities, zodiac signs and information on hours of daylight. Each month is illustrated with a line drawing showing some of the principle activities of that time of year. Most of which concentrate on agricultural work, though one possibly shows the punishment of a thief.

The year 1000 (though few at the time would have acknowledged this calendaric milestone) was a time of change. While there was already much that would be familiar to the modern viewer in terms of the British landscape - most of the ancient woods had vanished at "almost every modern English village existed and bore its modern name" there was also much that was different. Religion in particular was changing. Out were going the older beliefs to be replaced by Christianity, though many of the rituals were to last many centuries hence. The majority of people still believed in elves or spirits, but they were also coming under the influence of the newer god. Monasteries were important in much of the country, though they to were changing. Newer, more vigorous and restricted practises were becoming the norm - mixed religious institutions, marriage and the like were increasingly frowned upon.

Other changes were more dramatic. The authors of this history argue the role of woman until around 1000 CE was much more equal to those of men. Surviving wills frequently demonstrate that women were property owners and powerful in their own right, and there were legalistic changes to come:

"One Anglo-Saxon law code makes clear that a woman could walk out of her marriage on her own initiative if she cared to, and that if she took the children and cared for them, then she was also entitled to half the property."

"... a moralistic tone was entering the legal equation. 'If a woman during her husband's life commits adultery with another man...' read Law 53 of Canute, 'her legal husband is to have all her property, and she is to lose her nose and her ears.'"

These laws proved short lived, but increasingly the authors document the way that value would be applied to law. Crimes, whether they were of passion, violence or property where assigned a price and those who could afford to do so, could buy their way out of trouble as never before. Some, those effectively slaves, tied to the land had no such recourse.

Based on interviews with experts of the time, this is an enjoyable, readable account of life for people on the British Isles, 1000 years ago. The general history is informative, and the dirty "Anglo-Saxon" riddles are funny, though the authors do not attempt to pretend this was some rural idyll. After remarking on the way that the village life can seem romantic, they discuss the skeletal remains of a woman from that era who had died in childbirth. The bones of her unborn child stuck in her birth canal, she would, without medicine, pain killers or modern surgical methods have died an agonising death. There is much that we recognise of the past here, but for those of us living in the developed world, and modern Britain, life is far better.
Posted by Resolute Reader at 3:42 pm