Peter Alexander, Luke Sinwell & others - Marikana: A View from the Mountain and a Case to Answer 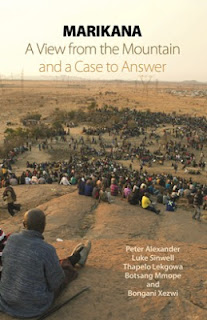 When footage of the massacre of some 34 platinum mineworkers at Marikana in South Africa reached television screens around the world it provoked anger and shock from millions of people. Watching the You Tube videos today, I am struck by two things: the violence of the police opening fire with automatic weapons on protesters at a distance and the justification for that violence. Within a few hours of the massacre the excuses were already being made - portraying the strikers as armed and violent, arguing that the massacre was the result of inter-union rivalry. Few of the journalists covering the deaths discussed the viewpoint of the strikers themselves and certainly didn't talk about the appalling conditions above and below ground, the low pay and the high profits of the mining companies.

This new book by South African researchers is an attempt to both understand what happened near the Marikana mountain and to give it some context. As a piece of social research it is probably unrivalled. Through history there have been any number of massacres of strikers and demonstrators, yet rarely have those involved been allowed to speak in detail about their experiences.

At the core of the book is a series of interviews with mineworkers who took part in the strike. They explain the conditions that forced them to take action, and their experiences of the unions who organise in the mining industry. For the miners, low pay, long hours and lack of health and safety are the norm, as one of those interviewed explains:


the problem that causes accidents in the mine is pressure, we work under a lot of pressure from our bosses because they want production and then there is also intimidation. They want you to do things that are sub-standard and if you don't want to do that and follow the rules.. they say they will fire you or beat you...

Unfortunately the main union the National Union of Mineworkers (NUM) has in the eyes of the workers themselves proved incapable of fighting for the members' interests. This is one of the themes of several of the interviews in the book, as one worker explains:


I am not satisfied at all about the way the union is representing us because it does not represent the workers' needs, it does what it is told to do, but in terms of having the workers' best interest at heart it has proven incapable of doing so. They side with the employer more than with the worker.

Another striker explains that this meant the workers' themselves organised a strike over pay, without approaching either the NUM or the other mining union, the Association of Mineworkers and Construction Union (AMCU). A rank and file action from below which meant that "this time we would overtake the unions, we ended up wanting this as workers. It was then that it seemed as though the unions were fighting us as the workers...."

On the first day of the strike the workers were turned back by management, who told them to go through the union. The workers decided that they needed to return to the NUM to try and get them to negotiate for them, feeling abashed that they had not done so. Peter Alexander explains what happened next as the strikers moved towards the NUM office. Before they got to the building


there was a line of armed men wearing red T-shirts. The strikers halted their march close to the main taxi rank to the right. The armed men opened fire.

The workers fled to the Marikana mountain where they camped in the open air, sang songs and discussed what to do. It was this initial violence that led some to argue that the problem was the different unions in the mines being at war with each other. The strikers argue that this is not the case:


people say that unions are at war, saying that NUM and AMCU are fighting. Those are lies. Here, workers are the ones who are at war... There are no parties fighting, here only workers, workers are fighting for their rights and they want their money and they are being killed by NUM and [NUM President] Zokwana and the mine and the government that we vote for every day.

Over the next few days some people attempt to argue with the strikers to return to work. They are unsuccessful because the workers themselves recognise that they need to fight to win. But the employers and the state clearly also believe there is much at stake. There is evidence that the violence was premeditated. The workers report the arrival of heavily equipped armoured vehicles that laid wire to box in the strikers. In his conclusion to this book Peter Alexander quotes a spokesperson for the South African Police Service saying, on the morning of the massacre that "Today is unfortunately D-Day".

The massacre itself left over thirty workers dead. The parts of this book, both the reportage and the interviews dealing with the massacre are horrifying. The workers describe frantic phone calls as they try to find out if friends and colleagues are alive. Those arrested are beaten and prevented from contacting their families. One can only imagine the horror that descended over the working class areas around the mine.

But the events did not defeat the strikers. In fact they helped to generalise the workers' political ideas. One worker comments that:


South Africa is a democratic country but we as mineworkers are excluded from this democracy. For one, a white person here in the mines get a better pay than a black person and they are more eligible for promotion and that oppress[es] us black people more... This is a main reason that is preventing me from realising my dreams...

Another worker describes how he would no longer trust the police, even a family member and wouldn't report a crime to them anymore.

As some of the researchers concluded:


The workers developed their own class analysis of the situation at Lonmin and, instead of being silenced and falling back when the steel armed of the state mowed down 34 of their colleagues, they became further determined, and more workers united until all of Lonmin came to a standstill.

In fact the response from the strikers to the "largest state massacre of South African citizens since the 1976 Soweto Uprising" is nothing short of inspiring. The strike did not collapse, despite the death of 34 strikers. They carried on, and were joined by more and more of their colleagues. By 18 September the employer gave in and awarded the strikers major pay rises. The result of this was a whole number of further strikes across South Africa, particularly amongst miners of platinum and gold. As Pete Alexander concludes, "this was one of the most remarkable acts of courage in labour history, anywhere and at any time".


This book too is remarkable, not simply because it tells a powerful story of oppression and struggle, but because it does so through the voices of those that took part. History rarely remembers those at the bottom of society and the authors of this book have collected their voices in a way that both inspires us today, but will also likely form the basis of many future studies.

According to one of the strikers who witnessed the massacre, the first miner who was shot and killed was wearing a Kaiser Chiefs t-shirt. He could have been a worker anywhere in the world, an ordinary person struggling to improve things for himself and his family. This short, but important book has many lessons for all of us, not just workers in South Africa. The role of the trade union bureaucrats, the links between big business and the state (as well as the details of what is currently taking place in South Africa) are all things that workers around the globe need to learn. The struggle for justice for the Marikana mineworkers will continue, but their fight is one that will leave us all stronger and this book is an important part of learning those lessons.

You can purchase Marikana: A View from the Mountain and a Case to Answer from the publisher, Bookmarks here.
Posted by Resolute Reader at 7:47 pm