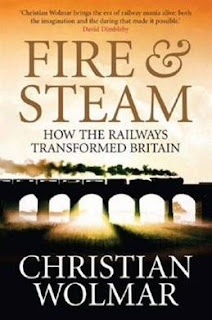 Christian Wolmar is an unashamed fan of railways. This is not because he has some sort of obsessional trainspotting tendencies, but rather because he sees the railways, and the infrastructure that they have developed over time, as an essential part of the development of modern industrial society. More than this though, Wolmar understands that the railways have also been shaped by the world around them. The modern British railway system has the shape and routes it does, because of decisions taken back in the 1800s. The paths that Virgin trains use today were laid out by a myriad of different companies over a very short space of time. Some of the technology used, in particular the rails themselves, dates from the earliest days when carts were drawn along out of mines by horses. More recent innovations, such as electrified track or double-decker carriages have been tried, rejected or not installed because of economic and political considerations made decades ago.

The railways have helped shape modern Britain. But they are certainly not perfect. Part of the problem lay with the haphazard and chaotic way that railway companies set out to lay track. There was no overall plan, they simply created routes that they thought would make money. Frequently, branch lines were laid for no other reason than to prevent rivals using the land or routes. Victorian laissez-faire capitalism meant that the state played little role in over-seeing the ventures and it was a long time before the chaos of the early rail system was reduced. In the post privatisation era, we seem to have returned to many of the problems that the railways suffered early on. The decision taken to privatise the railways was done, not out of desire to improve public transport (indeed the exact opposite) but out of sheer financial considerations. Public ownership of British railways was only a minor part of their history, and Wolmar blames this for a "fraught" relationship between government and the industry.

Certainly the decisions taken by the Tory government of the early 1990s were disastrous. Separating off the ownership of the track from the trains that ran on it, has caused chaos and confusion for millions of passengers. It has helped encourage the decline of the railway system and undermine public transport in the eyes of passengers and government. That said, the problems aren't simply to do with privatisation. In the post-World War II era, the system suffered enormously from lack of funding and finance. Today we have the crazy system were the private rail system can only work because the government pours enormous amounts of cash into it. Raising the question about why it isn't a public system in the first place.

Wolmar is a partisan writer. He argues that "the future is rail" and sees the railways as part of the way that we will reduce congestion and greenhouse gas emissions. In his final chapter he offers some tantalising glimpses of the potential for new technologies on the railways.

I've concentrated on the more modern aspects of this book, but the early history is certainly engaging. There is some fascinating stuff here - I was struck by the account of how the Duke of Wellington was to terrified to leave his carriage during the inauguration of the Liverpool to Manchester line, for fear of the protest by working people outside. Wolmar certainly doesn't forget the workers in his history. His accounts of the safety problems and the strikes for wages and better conditions sit well with his stories of wealthy men making even larger fortunes out of the railways. While we might company about delays and high prices today, we can be glad that we don't face the sheer number of accidents and crashes that dogged the earlier railways, though as Wolmar points out, British companies often took a very long time to learn lessons and introduce safety features.

This is an immensely enjoyable read and together with Wolmar's history of the London Underground, a recommended read for travellers.

Wolmar - The Subterranean Railway
Posted by Resolute Reader at 1:16 pm