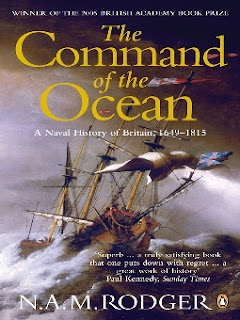 The subtitle of this book is "A Naval History of Britain". The of is important because this and its companion volumes deal with the inter-relationship between the Royal Navy and the wider social and economic history of the British Isles. So rather than simply seeing the naval forces as an extension of the British states interests, either as an extension of colonialism or as a vehicle to protect national interests, the author has a much more dialectical understanding of the relationship.

Given Rodger's interest in the Navy it is no surprise that he considers that it has had an enormous influence on the development and history of the British Isles. He clearly is right in many regards. The Victualing Board, the government body responsible for providing food and drink to the Navy had an big influence on British agriculture. As Rodger points out:


The Board was the largest single purchaser on the London markets for agricultural products, and its policy of managing the markets so as to encourage the growth of large firms, while at the same time promoting competition, was at least influential and possibly critical in the grown of a sophisticated and integrated national and eventually international agricultural market.

Rodger's encyclopedic knowledge of naval history means that he can make such arguments from a strong position. Indeed if one thing characterises this book it is the enormous amount of material in it. The main body of the text of my edition is almost 600 pages long and there are a further 300 pages of additional materials, indexes and appendices - and all for a history covering less than two centuries. This is a real strength, but readers shouldn't think that Rodger's spends lots of time on aspects of his subject. He makes it clear at the start that this is not a detailed history of battles, and sometimes the most memorable events get the briefest of mentions. The Mutiny on the Bounty, for instance is covered in a mere six lines.

Rodger is more interested in describing the changing nature of British Sea Power and the institutions that oversaw it. In part this was shaped by the needs of the British State, particularly during wartime. The early chapters on the period of the British Republic and then the Restoration show a navy that had been left in a bad state. In part this was due to lack of finances, but it was also due to the way that the post-revolutionary dictatorship had viewed the navy itself. The army was the force that had won the revolution, the navy was made up of representatives of the old order.

Over time the Navy became gradually more professional and more organised. Technologies developed and it does seem that the British were far better than other countries, particularly France, at developing and then bringing into use new equipment and designs. Some of this is particularly illuminating. I had no idea, for instance, that 18th and 19th century ships relied so much on copper plating to prevent damage to their hulls.

The book culminates in the defeat of Napoleon and a few pages earlier in the epic sea battle of Trafalgar. Despite his subject matter, Rodger avoids falling into the trap of arguing that Nelson's greatest victory was the key to winning that war. In fact, he makes it clear that in some respects it was peripheral to the wider military victory. Nonetheless Trafalgar was an immense morale boast to the British in their war with Napoleon and helped to set in stone the view that Britain ruled the waves. This was something that the British liked to think had been true since the Elizabethan era, but was not true in practise until the early part of the 19th century.

Rodger is not a radical historian and though this book has chapters on social history, it is in no way a history from below. His account of the lives of seamen is very general and he might well admit to revisionism over certain subjects. Certainly over some points (such as the levels of scurvy suffered on voyages, or the number of mutinies) he may well be right, a more specialist reviewer than myself will have to acknowledge this. Rodger is at pains however to paint the navy in a positive light. He thus argues that violence towards sailors, as punishment or as encouragement was far less common than we have previously thought. I was unconvinced by this. Rodger tends to portray life on navy ships far better than it may well have been. Nonetheless it is true that life in the Royal Navy towards the end of the 18th century was likely far better than it was for most other wage labourers in Britain.

Rodger finishes his history with some generalised comments about why the British ended up triumphant on the high seas. He avoids finding a single reason, rather trying to relate the technological developments with other social factors.


Middle-class participation in public life, professional skills, commerce, industry and private finance directly favoured and were favoured by navies. Sea power was most successful in countries with flexible and open social and political systems.

Here I feel the author is trying to have his cake and eat it. While British naval strength was both an out-growth of, and a contribution towards the development of British Capitalism, ultimately it was a part of the states armed force. In this context, the needs of the British State, tended towards benefiting the Navy. To imply otherwise, by suggesting that somehow Britain's political nature made the Navy inherently better is slightly bizarre and smacks of chauvinism.

I think the truth lies elsewhere. British capitalism developed faster and better than elsewhere precisely because the Revolutionary transformation that took place in the mid-1600s was far wider and deep going than elsewhere. That the Victualling Board could influence British agriculture to the extent it did, was precisely because the British peasantry had been destroyed. These wider social changes set the tone for the strength of British capitalism. It was this social system that needed the Royal Navy and shaped it in its own interests. Rodger's comes close to understanding this when he quotes  approvingly another author, "Warfare on the British model was a triumph for an enterprising and acquisitive society, not an authoritarian one."

These criticisms aside, this is a detailed, well written and exhaustive history of British Naval history. It will give the reader a lot of scope to understand particular events in history as well as understanding the reasons for success and victories in particular wars. The author's own interest in naval history doesn't blind him to wider historical events, and I look forward to reading the forthcoming volume dealing with the Royal Navy's 20th century.