Robert Roberts - The Classic Slum: Salford Life in the First Quarter of the Century 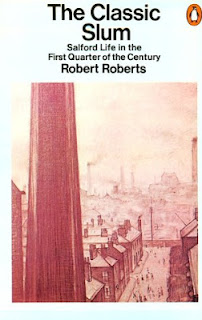 Taking it's title from Frederick Engels' description of Salford, The Classic Slum is part social history, part autobiography and part oral-history book. I've reviewed Robert Roberts' account of his childhood, A Ragged Schooling here, and was surprised to find that The Classic Slum is not a dry historical account of Salford. While there are some similarities between the two books and they cover similar periods, Roberts has created a very readable account of slum life in Salford. His account covers everything from education to crime and punishment and often he illustrates his point with a personal anecdote. Making this a very readable work of history. The descriptions of school life, or post-war dance halls are fascinating and occasionally too brief.

At the centre of Roberts' account is the First World War. Roberts' argues that before the war, most of the slum dwellers were part of an undermass. Men and women who had unskilled work, if they had any work at all, whose lives were marked by poverty and the constant quest for money to buy food or pay the rent. He dismisses those who look back on the period as some sort of golden age, arguing instead that the grinding poverty held little rosiness for most of Salford's population. Their lives were rarely happy and many people coped simply through drink, or violence.

The First World War, Robert's suggests led to a dramatic change. This is, he argues, not simply in the way that employment patterns changed, or the fact that many men joined up, the war he says, "cracked the form of English lower-class life and began an erosion of its socio-economic layers that has continued to this day". While I don't think that English class was so much as eroded, certainly it was changed. After the war, Robert's shows how the expectations of those who'd had decent wage packets for the first time, or returned from that army, were dramatically changed. So to was the position of women in society. Characteristically, Robert's shows this with a bitter-sweet recollection.

"My father was typical. In his cups he was wont to boast that, at the lathe he had to manipulate a micrometer and work to limits of one thousandth of an inch. We were much impressed, until one evening, in 1917 a teenage sister running a capstan in the iron works remaked indifferently that she, too, used a 'mike' to even finer limits. There was, she said, 'nothing to it'. The old man fell silent. Thus did status crumble!"

Roberts points out that during the war so 642,000 women went into government factories and millions more men and women were "doing manual work of almost every kind and developing new skills and new self-confidence." These people were changed and so was the perception of work and society. "The awe that many simpler souls had felt before the mystery of craft began to evaporate, to be replaced by at least some rational understanding."

This helps to explain the political transformation that took place. Roberts shows that socialist activism and politics was always part of Salford life. In fact the description of a great dock strike and a big solidarity demonstration by women is one of the highlights of The Classic Slum. But most of the "undermass" that Roberts described remained he says, indifferent to socialist agitators and parties. After the war this changed. The impact of the Russian Revolution, as well as the changes to peoples lives and work meant new ideas were about. People gathered to listen to socialist speakers on the street-corner near Roberts' family shop, where before they had ignored them. When his area elected its first Labour MP, Roberts' mother cried and they felt part of a new world.

This is no sentimental, rose-tinted view of working-class past. This is a book seeped in the sad history of Salford, where tens of thousands suffered from poverty and unemployment. Occasionally, those men and women fought back, struggling for change. Most of the time, they were ignored by the establishment, except when church or schoolmaster lectured them on morality and behaviour. While I don't necessarily agree with every aspect of Roberts' analysis (I'd like to see more studies of the people who made up the "undermass" for instance, and to what extent they could break out of this poverty trap), because this account is rooted in Roberts' own recollections, it is a living history one in which real people lived, suffered and struggled, sometimes laughing, often crying. For these reasons it deserves to be read by everyone, even those who have never visited the city.

I`m reading The Classic Slum at the moment - I read it and A Ragged Schooling about 30 years ago when I was living in the Manchester area. Roberts was an excellent writer - his account seems authentic without the sugary sentimentality that hamper many such accounts. I appreciate that he m,akes something of a stand againt writers who claim that the slums had a cosy dynamic of their own. I have known a few people who were relocated from the Trinity are oof Salford about fifty years ago when they were children; they talk about the meagreness of life around them. I would like to have known more about the people featured in the books and what became of them. I would esecially like to know more about Roberts himself - i can only find the barest details on line, though he died only in 1979. I believe that, in those days and erlier, bright children in very poor circumstances were often encouraged, and even sponsored sometimes, by a teacher, a vicar or someone who saw in them a better future. Otherwise, chances of getting out were slim. My husband`s grandfather, who, as a child, knew great povert, was 'rescued' by the First World War. He not only survived, but advanced, became an NCO and was able to go into engineering after the war, and became wealthy. It`s a fscinating topic.