Raymond Challinor - The Struggle for Hearts and Minds: Essays on the Second World War 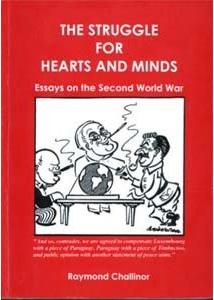 Raymond Challinor was a long standing British revolutionary socialist. He was also an accomplished historian, and a brilliant writer. Sadly his work is a little remembered today, which is a tragedy as a new generation of revolutionaries would benefit from reading his insightful essays.

The Struggle for Hearts and Minds is a short collection of essays that span many years of writing and activity. It concentrates on an alternative view of the Second World War, but also addresses questions like the origins of the Cold War. Some of these essays are available on the Marxist Internet Archive, though I would recommend that people get hold of the reprint of this book that came out in 2011.

Some of these essays cover ground taken up by other Angus Calder and Donny Gluckstein's recent book. Challinor's work benefits from the authors deep historical and literary knowledge. Like Gluckstein, Challinor was a Trotskyist, though not an orthodox one. His writings draw both on that revolutionary tradition, but he is not uncritical of Trotsky (and his followers) who in the 1930s and 1940s had expectations that with hindsight look unreasonable. Following on from the experience of 1917, Trotsky expected that a coming world war would lead to revolution. Because it did not happen, it can be easy to smirk at this idea, but Challinor points out that this wasn't an unusal expectation. In 1942 with the fall of Singapore, the British Government was in crisis and George Orwell wrote that "It seems to me that we are back to the 'revolutionary situation' which existed but not utlized after Dunkirk."

Just before war started, in August 1939, at a meeting between French ambassador Coulondre and Adolf Hitler, the Frenchman argued that in the event of war, "[t]he real victor... will be Trotsky". Trotksy himself pointed out that the use of his name was "to give a personal name to the spectre of revolution".

That the revolution didn't come was in part due to the way that working people in countries like Britain were subsumed into the war, partly because so few revolutionaries were arguing that this was a war for capitalism, rather than anti-fascism or democracy. Challinor touches on the craven attitudes of the Communist Party as well as the appalling attitude of the "democratic" nations towards the fledgling Spanish Republic. He also examines the way that internal dissent in the United Kingdom was attacked during the war and, in a brilliant short essay, exposes a possible miscarriage of justice against a seaman and aleged communist George Armstrong. An essay on the experience of working people during the Blitz, contrasting their experience with that of their wealthier compatriots is a centre piece of this excellent work. He even records that the "atistocrats of Scotland's dog kingdom had been evacuated to the United States and the colonies. Not wanting to run the risk of rare strains being wiped out in air raids". Challinor contrasts this with those poor East-Enders who were going to be evacuated to Brighton, "in the front line", until a campaign by a pioneer British Trotskyist Dr. Worrall helped prevent this. Worrall was vindicated when a bomb destroyed a cinema in Brighton and proved the place was no refuge from German attacks.

There is much in this short volume. Challinor's writing is tight and entertaining and every sentence seems loaded with information. If you've never read anything by him, I would suggest that this piece, The Red Mole of History, is an excellent place to start. I'd then recommend getting hold of The Struggle for Hearts and Minds.

Gluckstein - A People's History of the Second World War
Calder - The Myth of the Blitz
Calder - The People's War
Posted by Resolute Reader at 11:52 am