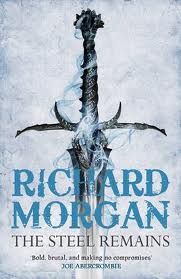 Richard Morgan is best known for his gritty, violent, near-future novels, usually set in a universe where Earth's multinationals hold enormous power over people and governments. The Steel Remains was his first foray into fantasy writing and Morgan has brought to the genre his unique blend of violence, realism and sex.

There are no kindly elves or banqueting dwarves in this novel. Set in a feudal Empire The Steel Remains is centered on three heroes of an earlier war. Each of them suffers from the veterans disease - they're heroes, but once hostilities are over, no one, least of all the authorities seems to really care. Ringil Eskiath is living in self imposed exile in a small village were he earns his keep by telling travellers at the local inn, battle stories in exchange for food and lodging. His previous companions suffer their retirement similarly, herding animals or working for the emperor.

Morgan's earlier novels have been violent affairs and when the human empire in this one is threatened by supernatural invasion, his characters fight back with swords, daggers and spears. The cutting edge technology here, as opposed to the guns of Morgan's science fiction makes for more brutal reading. In addition to the blood and spilt guts, Morgan spends quite a bit of time dealing with the sexual activities of his characters. In particular, Ringil Eskiath, who is not only in exile, but also shunned by a deeply homophobic culture.

Morgan paints a picture of a society were macho behaviour, violence and brutality are as much a part of daily life as grinding poverty and farming. Those who celebrate Ringil's exploits in the war, also fear and despise his sexuality, which sets up some key scenes in the story. In this interview, the author remarks on his surprise and annoyance that some reviewers who clearly enjoyed his earlier books (laced as they were with violence and heterosexual sex) seem to find this one "gratuitous". All I can comment is that some of those reading and writing about fantasy need to wake up to 21st century realities and stop judging the world by the norms of Tolkien.

All in all The Steel Remains is an enjoyable, modern take on the swords and sorcery genre. It did not grab me as much as Morgan's more recent Black Man and due to it setting lacks some of his more nuanced commentaries on contemporary society. Readers looking for something slightly different from the sterile worlds of Tolkien and Brooks may well enjoy this.