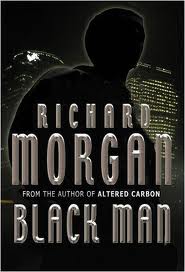 Somehow I'd missed Richard Morgan's science fiction novel Black Man. Perhaps this was because his previous book Market Forces didn't quite get me. It was a little too violent, a little too full of detailed sex scenes and less coherent than some of his other writings.

Black Man however is very much a return to form. Like Market Forces it is set in the not to distant future, one which extrapolates from our current world to paint a nasty dirty picture of a future where neo-liberal politics and market forces have let rip. The United States has been torn asunder, ripped into two halves roughly matching the demarcation of the north-south states of the American Civil War. One might also say its been broken up under the pressure of its own contradictions.

Mars has been terraformed. Its a destination for those who have something to escape on earth, or dreams of striking it rich. Unfortunately, Mars, like Earth is dominated by multinationals who's exploitation of their workers allows few to actually "make it".

Into this bleak future, Morgan injects constant conflict. Multinational forces vie with government troops to control regions, resources and workers. There is an ever present war between the new super-power, China and one or other of the old US nations. But, as Morgan points out, China is happier to let her economic muscle and hard cash buy her interests abroad, rather than escalating into open conflict.

The titular Black Man is Carl Marsalis. He is a "twist" in the near racist slang of the time. Properly known as a "thirteen" he is a genetically enhanced human, a throwback to an earlier human psyche. He's a contract killer, a murderer for hire and his genetic improvements give him superhuman speed and violence. Released from a southern goal for financing an illegal abortion he's given a mission to track down another Thirteen who has escaped from Mars and is committing apparently random serial killings around the United States.

This might seem like fairly standard SF fare. But Morgan weaves a complex set of ideas and characters into the plot. But at heart, what dominates the story is the interaction between private business interests, the sometimes competing interests of various states and the political context of this future. Black Man doesn't simply refer to the underground nature of Marsalis' work. But also to his skin colour and Morgan illustrates this by exploring future racism, as well as contemporary attitudes to Islam (one of Marsalis' key colleagues is a Muslim woman).

As with some of his earlier works, Morgan is concerned about the unbalanced, exploitative nature of capitalism and the way it distorts and destroys lives. At one key point in the book, when Marsalis is facing down another thirteen who claims to have a gun that he took "from a man I killed", Marsalis monologues:

Such marxism-lite is a feature of Morgan's work. While it isn't that unusual in SF to find radical ideas, but I like to think that a book that references Tariq Ali and Susan Faludi in its acknowledgements is reflecting the wider questioning of capitalism that is taking place around the world.

To those who are drawing anti-capitalist conclusions, Morgan doesn't offer any collective solutions. In fact the opposite, his characters' violence is very much a personalised settling of scores. Nonetheless Morgan's vision of a future of war, racism, islamaphobia and multinational exploitation on multiple planets is one that surly inspires us to revolution today in order to avoid it.