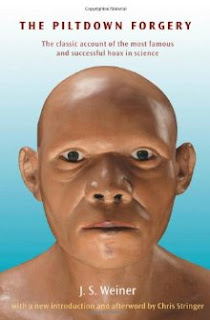 In December 1912, Charles Dawson and Arthur Woodward announced an enormous scientific discovery to a packed lecture room. Hundreds of scientists were fascinated because the find could offer proof of Darwin's evolutionary theory and because in those days of scientific racism, some were hoping that a European proto-human might be found to counter the ancient remains that had hither-to only been found in Asia.

Piltdown Man has become synonymous with archaeological and anthropological forgery, yet the story of how the hoax was uncovered is a fascinating tale of scientific investigation. This contrasts with the way that some sections of the scientific community hailed the revelations at the time despite some serious doubts about the finds and the discoverer.

Almost as soon as the discovery was announced, it courted controversy. Some argued that the two pieces were not from the same skeleton, others muttered darker allegations. David Waterson, Professor of Anatomy for instance, "found it hard to conceive of a functional association between a jaw [bone] so similar to that of a chimpanzee and a cranium in all essentials human."

The problem was several-fold. Firstly at the beginnings of the twentieth century there were very few ways of determining an item's age. For particularly ancient finds, the best way of doing so was to date it from surrounding geography and geology, as well as other contemporary items that could be dated by other means. Today, a few hours of carbon dating would have exposed the Piltdown hoax very quickly. In 1912 things were much more complicated. Secondly since the scientists did not really know what an early human might look like the differences in the structure of the jaw-bone to that of a modern human were merely assumed to be because the bone came from an early evolutionary stage. Finally the hoaxer and gone to extreme lengths to make the find look genuine. The bones were stained in ways that were difficult to detect with contemporary instruments. The pieces were scattered and other, more unusual finds were associated with them. Finally, the principle discoverer, Charles Dawson was notoriously bad at recording his finds and keeping records.

J.S. Weiner was one of the scientists who gathered together all of the scientific proof that the Piltdown remains were a forgery and this is the classic history of the expose. Despite effectively being a documentation of a scientific investigation that is wholly negative, it contains a wealth of detail for the reader, and dare I say it, lessons for scientists from multiple disciplines today.

Most of the first half of the book is an account of the discovery and unveiling of the various finds associated with Piltdown, followed by a detailed marshaling of the evidence against an ancient age for the bones. Firstly Weiner argues that the gravels were the remains were "found" were completely "unfossiliferous" (a rather wonderful word there). Secondly he describes an ingenious dating method used before carbon-dating which dates a bone by the amount of fluorine it has absorbed since internment. This is one of the gems of science in this book and was a bit of a revelation to me. Weiner documents the expose of the various types of staining of the bones and other remains that was designed to make them appear old and finally he argues that "our scrutiny of the accounts of the digging up of the various fragment has given us no confidence that anything did come from undisturbed soil, despite Dawson's assertions."

The order of this is important. Weiner goes to great lengths to make the reader feel that he has proved the forgery scientifically. Once that has been accomplished, Weiner, in the second half of the book, sets out an argument that demolishes Charles Dawson's claims to a scientific authority.

When this book was first published in 1955 most of the principle people who had been involved had died. Nonetheless, Weiner remains careful not to point the finger to much. In fact, by starting with the science he avoids the book becoming simply a collection of allegations and gossip aimed at some of those involved. Having said that, Weiner does demonstrate that Charles Dawson in particular had a very bad reputation amongst his colleagues (amateur and professional) and a series of dubious discoveries to his name. These discoveries seem laughable today, and I cannot document them here. I would direct the interested reader to this short piece or Weiner's book.

It appears that several of Dawson's contemporaries (again, amateur and professional) never believed that the Piltdown was real. In fact one, Harry Morris, claimed to have overheard a conversation by Dawson that a fossil tooth, that was important to the identification of the bones as ancient, was "imported from France". Dawson was accused of "salting the mine", a damning allegation that matched other, contemporary criticisms of him for "plagiarism" and lack of scientific rigour.

Since Weiner and his colleagues proved the Piltdown hoax there has been much speculation about who was the perpetrator of the crime. Circumstantial evidence as well as some witness statements make it almost certain that Charles Dawson was the guilty party. Weiner points out that there may have been others involved, or a single other person who led a willing Dawson along. However Weiner also shows convincingly that this unknown other party must have been extremely knowledgeable in a variety of scientific disciplines as well as knowing Dawson's movements very well.

While there will always be a lingering doubt over Dawson's role, he died long before the truth came out. A more interesting question is why the doubts that did exist were never allowed to be part of the scientific discourse around the discovery. In some cases personal conflict was an important part. Harry Morris for instance seems to have had an ongoing feud with Dawson and while his own notes show clear belief in forgery from day one, he didn't declaim this publicly. Part of the problem was that the Piltdown theory backed up Morris' own wider theories of human history in southern England.

Weiner's book then shouldn't simply be seen as an attempt to expose a criminal, though it reads like an archaeological detective novel. Instead it is a wonderful explanation of the importance of the scientific method. The mistakes that were made by scientists in the early 1900s may have had their roots in racial beliefs, mistaken scientific knowledge, or simply a desire to be associated with a breakthrough discovery. Dawson himself exhibited what Weiner calls an "anxiety for recognition" - never a good thing for a scientist.

More importantly the final expose of the Piltdown forgery demonstrates how important it is for scientists to have a well rounded knowledge, rather than specialising too much. Bringing together archaeology, anthropology, chemistry, physics and history as well as being prepared to search through old cupboards and bookshelves, Weiner's and his colleagues exposed a sad episode in the history of science. But they may have made us all clearer on our own history in the process.

This review is of the 1955 edition of The Piltdown Forgery. The re-publication in 2003 had a new introduction and afterword by Chris Stringer which no-doubt puts the debates into a modern context. I would suggest that readers interested in reading Weiner's book try and find the edition with the Stringer pieces. This can be ordered as print-on-demand from the publisher here.

Stringer - The Origin of Our Species
Posted by Resolute Reader at 8:13 pm