Brian Fagan - Floods, Famines and Emperors - El Niño and the Fate of Civilizations 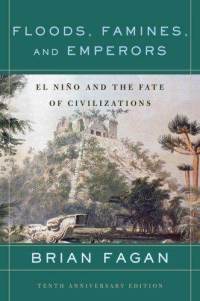 Environmental archaeologist and historian Brian Fagan has written a number of excellent books on the historical links between environmental and climatic change and human history. This early book of his, concentrates on the links between a particular aspect of the Earth's environmental systems and their wider influence on the global climate and thence, human civilisation.

El Niño is a semi-regular change in the temperature at the surface of the Pacific Ocean. Every five years or so, these temperature changes in the East of the Pacific cause a corresponding drop in air pressure in the West. This regular oscillation, which likely has no single cause, can have major impacts depending on the severity of the changes and other factors that can exacerbate the fluctuations in the climate / weather.

The sudden shifts in climate can wreak havoc on human society. Fagan wrote this book in the late 1990s when El Niño was already a household word as a result of a number of extreme periods of weather in the 1980s and 1990s. Scientific studies were launched by a number of governments to try and understand the process better, as extreme weather changes caused by El Niño spread famine, floods and drought around the globe. Some of the consequences were appalling. The 1992 drought threatened up to 80 million people in Southern Africa. An early famine in the Sahel in 1972, another El Niño year, killed up to 200,000 and destroyed 1.2 million cattle - the principle source of food and wealth the people there.

Much of the book is concerned with this historical impacts of El Niño, as well as the way that wider climatic shifts have altered civilisation. Fagan is particular keen to link particular periods of climatic changes with similar impacts around the globe. But mostly he is examining the way that different societies can reach the point when changes in the climate can have devastating consequences. Some societies survive or adapt. One of the most fascinating chapters is the Moche people of western Peru who, in around 1000 AD were destroyed as their world warmed and the waters they relied on in their dry homelands vanished. Their leaders became increasing authoritarian to try and survive and moved their whole kingdoms closer to the sources of water in an effort to survive and maintain power. Their much reduced society was a shadow of its more glorious past, their former lands swallowed by sand dunes.

Fagan marks the passing of a number of civilisations. One of the themes he comes to, is that some of these societies had reached or exceeded the carrying capacity of the lands they relied on. He then uses this to argue that we, in the modern world, are in danger off allowing our growing population to threaten our own survival. This is not to paint Fagan as some sort of neo-Malthusian. He is more subtle than that, understanding that other factors have a major impact upon environmental questions and so on. However he stops short I think of a clear understanding of the barriers to modern society dealing with climatic catastrophe. That's not to say he doesn't come close. In discussing the 1992 Famine in Southern Africa, he shows how the IMF imposed structural adjustment schemes had lead to that country selling all its grain reserve to raise cash. Meaning that when El Niño caused droughts, they had to rely on foreign aid.

Its this difference between modern civilisation and the past that needs developing. While there are of course similarities between us today and in the past, our ability to shape the world has grown a hundred fold, but the impact upon the natural world has also grown. The motivating forces of capitalism today are the biggest barrier to us having a rational relationship with nature, as well as dealing with the consequences of environmental crises. We saw that in Africa in 1992, and more recently in New Orleans after Hurricane Katrina. Capitalism continues to cause environmental crisis, and remains a barrier to the struggle to prevent more.