Kim Stanley Robinson - The Years of Rice and Salt 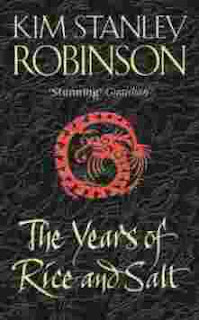 Kim Stanley Robinson's alternate world history is an incredibly well thought out imagining of how our world might of developed had European civilisation been stopped completely by the Black Death. In this alternate timeline, history develops outwards from the far-East, China in particular. Thus the world is dominated by different religions, ideas and methods.

The scientific revolution takes place in Samarkand, the America's are discovered from the West by Chinese explorers and geo-politcal tensions eventually explode in a pre-atomic age world war, only in this timeline it lasts six decades.

The detail of the story is immense, rather than telling a complete narrative, the author focuses on individuals at different times. Borrowing heavily from Buddist ideas, Robinson centres the story a small group of individuals, reincarnated time and again, they occasionally remember their own pasts, and at different times and places are each others parents, lovers and friends. This allows Robinson to focus on indivudal relationships as well as the grand narrative and helps make this unreal history seem much more realistic.

At times, the book seems over-seeped in religious and ideological discussion. This can be annoying, but its worth reading through. With some of the discussions, such as the debates about reincarnation, I think Robinson is demonstrating how different ideas fit different times. In the atomic age, reincarnation seems quaint and ill sits in a world where the tiny atoms are being studied. This is a very religious novel, in the sense that religion plays an important part in the story, and Robinson clearly has done his research well. Again though, his musings on how things might develop and change are clever - I particularly like the way that the shortage of men following the great war leads to a growth of feminist thinking and new forms of Islam, influenced by these ideas.

Robinson himself develops an almost Marxist view of history, though he seems to focus mostly on a sort of inevitable rise of civilisation, through science and technology. Towards the end his characters, this time female scientists, attempt to set up a world grouping of scientists to better lead humanity and avoid nuclear war.

This is a long novel, 700 odd pages, but the different parts are very self contained, some are love stories, some tales of anguish and war. The common threads help it hang together well. There are some lovely injokes to, the Islamic archaeologists attempting to understand the purpose of stonehenge, or excited by a preserved village from medieval France and the musing of people who wonder what the world would have been like had civilisation not come from the East.

While its hard at times, The Years of Rice and Salt is a fascinating and clever novel that's worth reading.

I loved the Time of Rice and Salt. It was the first book by Kim Stanley Robinson that I read--my sister loaned me a copy of it. I have since read most of his work, and am currently reading Galileo's Dream.

Thanks for posting your review.