Arthur I. Miller - Empire of the Stars 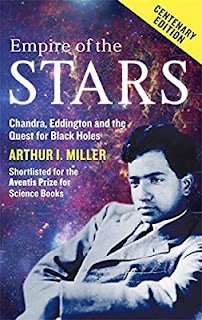 The life of Subrahmanyan Chandrasekhar was as remarkable as the astronomical objects he investigated. Born into a relatively wealthy family in Lahore in 1910, by his teens he was already showing an amazing talent for mathematics and science. At the age of 19 he won a scholarship from the Indian government to study at Cambridge University. Having already published several scientific papers he got on the boat fully expecting to be one of the elite students at Cambridge. While on the boat, he had a stunning insight. It was a moment of theoretical clarity that would define his career, and possibly also his whole personality.

In short, Chandra (as he was known) worked out that a white dwarf star had a theoretical limited mass. A star that exceeded this would collapse on itself. Today, the idea of stars collapsing to form black holes is common place. They've been observed, worked out and are part of wider culture. Then, however, the idea was revolutionary and challenged accepted ideas in theoretical physics and brought Chandra into conflict with the scientific establishment.

Arthur I. Miller's book is a study of Chandra's life and work, but places at its heart the theoretical debate between Chandra and Arthur Eddington, then the most famous and popular astrophysicist in the world. Chandra's time at Cambridge wasn't easy. It was an alien environment and there is no doubt that he suffered from racism there. There is a telling anecdote in Miller's book, recounted by Chandra. Candra's uncle C.V. Raman a renowned Indian physicist, was walking with Ernest Rutherford in Cambridge when Raman saw that the students always seemed to be playing tennis. Raman asked "Do they ever do any work?" to which the distinguished Rutherford replied, with a laugh, "My dear Professor Raman, we don't want bookworms. We want governors for our empire". Which this sort of approach at the heart of the university, Chandra was doomed to clash with his peers and the academy.

He was also hampered by the way his ideas challenged the scientific status quo. Astrophysics was in a state of flux. Theoretical developments in quantum mechanics, relativity and nuclear physics were turning established ideas on their head. Things exploded at an infamous meeting of the Royal Astronomical Society in 1935. Chandra presented a paper and Arthur Eddington, who Chandra new as a friend, teacher and confident launched into a violent, ill spirited, rude attack, publicly ridiculing his ideas and Chandra himself. Chandra was completely taken by surprised and utterly unprepared for what he saw as a betrayal and mistaken science. There is no doubt that Eddington behaved bizarrely and badly - though he continued to be friendly to Chandra. The moment was life-defining for Chandra who never got over the event. Years later he would recall it, and never forgot that most of his friends failed to stand by him.

Chandra was eventually proved right. Eddington's models fell to pieces under new scientific investigations, ideas and mathematics. But the debate marked an break and likely also contributed to Eddington's increasingly esoteric ideas. In my view there is no doubt that Eddington was also motivated by a desire to crush a challenger, and this was shaped by a racist colonial attitude to those from India. Chandra himself was so shocked, partly because he had rarely experienced this, and the atmosphere at Cambridge drove him to move to the United States.

In the US Chandra was accepted much more widely and there's no doubt he was much happier there. But Miller points out that his experience wasn't all carefree. In part there was US racism, though this wasn't quite as bad in the northern colleges were Chandra worked. It did have its moments though, such as when Chandra and his wife were refused entry to a New York Hotel. Miller is particularly good at drawing out two aspects of Chandra's life - the first is his constant quest to find new areas and materials to study. Innovative thinking, brilliant mathematics and complete grasp of the theoretical material. But Miller also shows how Chandra personally was shaped by his experiences. Chandra was frequently frustrated that his early work went acknowledged for many decades. This frustration however being contradicted when Chandra was frustrated that his Nobel Prize focused on precisely this aspect of his work.

The story is compelling and those interested in the history of science will find it fascinating. Chandra, in many ways, represents the new atomic era surpassing the old 19th century science. But the book suffers because the author isn't sure whether to make it a biography of Chandra or a history of the science of black holes. As such it tends to fall between the two. I also found Miller's explanations of some of the key concepts a little complicated (though to be fair the science is difficult). That said there is much material of interest here and I found it an enjoyable read.

Posted by Resolute Reader at 8:54 pm