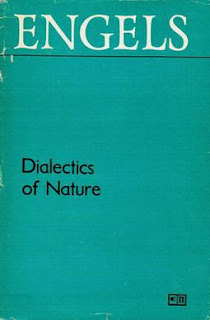 Writing a review of Frederick Engels' Dialectics of Nature is a difficult task. The book is incomplete - fragmentary in parts - covers a wide range of subjects that do not always sit easily together and is, at least from a purely scientific point of view very dated in parts. Readers are hampered also by the language, as Engels use of key scientific terms reflects the era of writing and not their usage today. Yet the book remains worthy of study and, had it been available earlier in English, could well have been much more influential than it was. In 1873 Engels wrote to Marx that he had been lying in bed and decided to begin work on what would become the Dialectics of Nature after realising that the natural sciences were all about "matter in motion". This is important because it shows that Engels was beginning from the nature of change - the dialectics of the title - rather than the science that makes up much of the current manuscript.

The science, as I said, is dated. But it is important. Reading it today much of the material would seem (if updated) fairly obvious to say a first year physics student at university. But it must be seen in the context of contemporary debates. What Engels demonstrates is an amazing awareness and knowledge of what were front line scientific debates at the time he was writing. This is not the product of a casual enthusiast but someone who was au fait with the detail of major scientific debates. The chapter on electricity, which forms a substantial chunk of the manuscript deals, in great depth with the nature of electricity itself, Engels placing himself firmly on the modern theories against the "barren lumber of ancient, doubtful experiments... an uncertain fumbling in the dark." His detailed refutation of what he calls an "obsolete scientific standpoint" leads to him rejecting "all traditional theoretical notions about electricity" and highlighting more contemporary theories based on a detail knowledge of the science and experimental results available at the time. It would be another fourteen years before the electron was finally discovered so Engels is firmly on the right side of science.

It is, however, the sections on dialectics itself which remain of most interest and use today. Sadly these are mostly in note form. They form, at least in the 1939 British addition, a general argument, but in some places are little more than jottings down of comments and ideas. These in themselves are sometimes fascinating - I was struck by the evolution of ideas in astronomy that were taking place and how scientists (and Engels) were grappling with a transformative moment in the understanding the universe. But Engels argues what matters most is an approach to science that uses dialectical thinking:


Dialectics divested of mysticism becomes an absolute necessity for natural science, which has forsaken the field where rigid categories sufficed as it were the lower mathematics of logic, its everyday weapons. Philosophy takes its revenge posthumously on natural science for the latter having deserted it; and yet the scientists could have seen even from the successes in natural science achieved by philosophy that the latter possessed something that was superior to them even in their own special sphere.

Earlier he comments, "thinking is necessary: atoms and molecules, etc, cannot be observed under the microscope, but only by the process of thought". Yet Engels isn't arguing for abstract thought - he points out that Hegel...is a much more resolute materialist than the modern natural scientists" because he was concerned with "the thing in itself".

Engels is concerned with the process of change that takes place in nature. Sadly his work here on dialectics has often been confused by an over focus on the three laws of dialectics that he presents early in the work. Some on the socialist left, particularly the Stalinist brand of Marxism, tend to see these laws as rigid, leading others to reject them. In an essay on Dialectics, nature and the Dialectics of Nature Camilla Royle has made the point that these rules are important in helping us understand processes in nature and aspects of dialectics, but we cannot reduce science down to them. She concludes:


However, noting interesting examples of Hegel’s laws in “nature” does not give much clue as to how, if at all, scientists can use these laws. If scientists are expected to start from the idea that they go out and look for examples of the laws in their work...  it risks turning dialectics into a scholastic exercise. All of the biologists mentioned state that what they do when they go into a lab is the same science using the same methods as anyone else. Dialectics is for them a way to interpret the results of their experiments rather than an excuse not to do those experiments. Knowing the laws of dialectics is no substitute for a scientific understanding based on knowledge of specific material phenomena.

Engels' work abounds with examples of this approach. For example:


Continual change, i.e., abolition of abstract identity with itself, is also found in so-called inorganic nature. Geology is its history. On the surface, mechanical changes (denudation, frost), chemical changes (weathering); internally, mechanical changes (pressure), heat (volcanic), chemical (water, acids, binding substances); on a large scale – upheavals, earthquakes, etc. The slate of today is fundamentally different from the ooze from which it is formed, the chalk from the loose microscopic shells that compose it, even more so limestone, which indeed according to some is of purely organic origin, and sandstone from the loose sea sand, which again is derived from disintegrated granite, etc., not to speak of coal.

Here Engels is emphasising the process of historic change as being integral to understanding the geology that we see in the landscapes today. Again, in a small not "Simple and Compound", Engels shows how a living creature is a not reducible to components, nor is it simply a sum of those components:


Categories which even in organic nature likewise lose their meaning and become inapplicable. An animal is expressed neither by its mechanical composition from bones, blood, gristle, muscles, tissues, etc., .nor by its chemical composition from the elements. Hegel (Enzyklopädie, I, p. 256).The organism is neither simple nor compound, however complex it may be.

And elsewhere he emphasises dialectics as an approach that can destroy old irrational beliefs. Writing on life and death he comments:


The dialectical conception of life is nothing more than this. But for anyone who has once understood this, all talk of the immortality of the soul is done away with. Death is either the dissolution of the organic body, leaving nothing behind but the chemical constituents that formed its substance, or it leaves behind a vital principle, more or less the soul, that then survives all living organisms, and not only human beings. Here, therefore, by means of dialectics, simply becoming clear about the nature of life and death suffices to abolish an ancient superstition. Living means dying.

One of the most complete sections of Dialectics is the famous chapter The Part Played by Labour in the Transition from Ape to Man. This is probably the most influential part of the work, which has been published separately on many occasions. Engels demonstrates how the evolution of modern humans was shaped by our inherent ability to labour on nature for our own needs. This then transformed our brain in a dialectical process. This pamphlet is also where Engels sets out a wider understanding of society's interaction with nature and he highlights the impact of capitalism on our environment - arguing, though he doesn't use the word, that capitalism cannot be sustainable. For readers who think that Marx and Engels had little to say of use to the environmental movement, this is the chapter to read.

In fact, while much of the book is dated, and some of it feels abstract, Engels never loses sight of his wider project - the struggle to end capitalism and win socialism. Right at the start of the book Engels highlights how capitalism has immiserated the mass of humanity and a new, higher, form of social organisation is needed to liberate us all:


In the most advanced industrial countries we have subdued the forces of nature and pressed them into the service of mankind; we have thereby infinitely multiplied production, so that a child now produces more than a hundred adults previously did. And what is the result? Increasing overwork and increasing misery of the masses, and every ten years a great collapse. Darwin did not know what a bitter satire he wrote on mankind, and especially on his countrymen, when he showed that free competition, the struggle for existence, which the economists celebrate as the highest historical achievement, is the normal state of the animal kingdom. Only conscious organisation of social production, in which production and distribution are carried on in a planned way, can lift mankind above the rest of the animal world as regards the social aspect, in the same way that production in general has done this for men in their aspect as species. Historical evolution makes such an organisation daily more indispensable, but also with every day more possible. From it will date a new epoch of history, in which mankind itself, and with mankind all branches of its activity, and especially natural science, will experience an advance that will put everything preceding it in the deepest shade.

Royle - A Rebel's Guide to Engels
Engels - Socialism: Utopian and Scientific
Engels - The Origin of the Family, Private Property and the State

Engels - The Condition of the Working Class in England
Posted by Resolute Reader at 5:02 pm