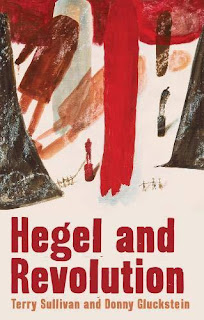 There is a famous quote attributed to Lenin about Marx's Capital where he claims that Marx's masterpiece is impossible to understand completely "especially its first Chapter, without having thoroughly studied and understood the whole of Hegel's Logic". But Hegel himself is considered daunting in the extreme. His name and works used as examples of complex books that are considered to be beyond the reach of ordinary readers. Many times I've sat in pubs after socialist meetings and heard such discussions.

So I am very pleased that Terry Sullivan and Donny Gluckstein have produced Hegel and Revolution. This is intended as an introductory work with, according to the authors, two aims. The first is to introduce the "thought and life" of Georg Wilhelm Friedrich Hegel. The second is to "outline the very strong influence Hegel had on Karl Marx... as well as the wider Marxist and socialist movement". These are ambitious aims, and to attempt the task in a book of less than 100 pages is a brave feet. The authors acknowledge that there are "certain areas of Hegel's thought" that they do not consider at all. Instead they focus on three key areas that connect to the work of Marx and give a feeling for Hegel himself. These are alienation, Hegel's philosophy of history and dialectics.

Key to understanding Hegel is the French Revolution and so the authors begin with placing Hegel into the context of the Revolution, and putting this Revolution into its historical context. It's an approach that Hegel himself might well have appreciated:

Hegel realised that dependence on a single element of the overall picture, or an individual human being, or a piecemeal analysis of separate events would miss the complex and interconnected character of the transition. 'Everything that exists stands in correlation,and this correlation is the veritable nature of every existence'.

I found the author's summary of Hegel's thought accessible, though I had to read and re-read several pages to get my head around his concepts. Their focus is on how Hegel's ideas were developed and built upon. So in the section on alienation, where they summarise Hegel's approach like this:


Importantly for Hegel consciousness is not just the consciousness of the individual but it is also the consciousness of spirit. More precisely this should be 'Absolute Spirit', that is, God. This might lead the reader to question: 'How does this square with the first-person point of view of phenomenology?' Hegel rejected the common idea that God is different from and superior to the world it has created. Rather, he held that God is in some sense constituted by humans and the natural world. Consequently, humans including the self-examination of their consciousness that, make up, at least in part, God.

But Marx argues this is wrong:


'There is a double error in Hegel'. The first is that 'When, for instance, wealth, state-power, etc. are understood by Hegel as entities estranged from the human being, this only happens in their form as thoughts'. This is, for Hegel it is not wealth (or the lack of it), state-power or anything else that we experience as part of the material reality of our lives that is of primary importance in understanding alienation. It is not our separation from and lack of control over these aspects of the material world that is the source of our alienation. Rather, it is the thought of such entities which confronts us as something alien.

The second error, detected by Marx, is that Hegel "only knows and recognises... abstractly mental labour". So it is on the mind that matters, not the real world outside. The authors conclude that, according to Hegel, "we humans have created the world around us but we are not aware of this and thus we are alienated from it". These differences are not abstract. Overcoming alienation for Hegel requires the changing of the mind - hence his emphasis on the importance of rational thought. For Marx it requires the changing of the world.

While critical of Hegel the authors nonetheless defend him from some of his critics. For instance they argue against the idea that Hegel held a "great man theory" of history. I don't know enough about the debates here and it was one of those places were the focus of the book slightly undermined the material. Because the writers are emphasising the importance of Hegel's ideas and method to Marx, I felt the material on Hegel suffered. To be fair they are doing this in a book of very short length and something has to go, but I wondered if another twenty pages could have helped flesh out debates.

It is the material on dialectics that readers will find perhaps the most useful, and perplexing. Here the authors are brilliant in demonstrating Hegel's own thoughts (and approach) and how Marx takes things forward. But they are also cautious. Responding to one critic of Hegel they write:


These irregularities do not mean that the dialectic method is wrong, rather, merely that Hegel has not been able to carry out his own method consistently. Our own conclusion is that this inability of Hegel is indicative of the fact that the dialectic and dialectical method is not as widely applicable as he argues. It cannot he used to understand all of thought, rather, it must be used much more selectively and when that is done appropriately it can be uniquely insightful.

I think this is important. What the authors celebrate is not simply Marx's development of Hegel, but Hegel's own philosophical approach (they say it feels "fresh") because it allows us to unpick the processes of change and development. One of his "great innovations was to put a sense of history into the study of philosophy". In that sense his work is "timeless" as they say, but it is also a basis for other developments.

I'm not sure that Hegel and Revolution will lead me to read Hegel. But it did give me a sense of the basic ideas that a much better appreciation for the work of Marx and Engels in developing philosophical thought - though as always, we must remember that "the point is to change it".