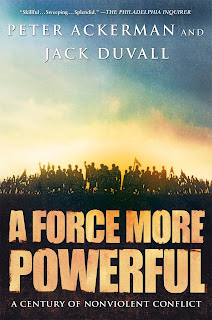 In this wide-ranging history authors Peter Ackerman and Jack Duvall attempt to demonstrate that nonviolent strategies are the most successful and viable way of bringing about social change. Unfortunately their argument is limited by their understanding of social change and because they fail to get to the heart of what capitalism is.

The book covers a lot of 20th century territory. It begins with the 1905 Russian Revolution which, rather surprisingly for those in the Marxist and revolutionary socialist traditions, turns out to have be considered one of the earliest examples of a successful nonviolent movement. Figures like Gandhi and Tolstoy considered it a success because it did not degenerate into violence and introduced the first democratic victories under the Tsar.

Right at the start of the book then we already see the limitations of Ackerman and Duvall's philosophy. Firstly the 1905 Revolution was hardly a success for democracy. The limited enfranchisement that the Tsar granted was very much a toothless parliament, utterly unable to make any major changes that could benefit the mass of the population. Further though, the Revolution itself was limited by its failure to engage in a more forceful confrontation with the ruling class - a point that Trotsky makes in his own account 1905. Most importantly though, their account fails to acknowledge that one of the significant developments of the Russian Revolution of 1905 was the creation of workers' councils, in particular the Petrograd Soviet. These organs of bottom up democracy formed the basis for new ways of organising society, yet the authors fail to elaborate on what this might have meant for radical change.

Their account of 1905 demonstrates how the authors are, much like Erica Chenoweth and Maria Stephan's more recent theoretical book Why Civil Resistance Workers, limited by their belief that Bourgeois democracy is the highest achievable ambition for social movements fighting oppression and dictatorship.

Other chapters - whether discussing the 1923 German protests against the French Occupation of the Ruhr, the First Palestinian Intifada and the Anti-Apartheid movements (as well as many more) have many interesting accounts of the struggle, but fail to get to grips with key issues - in particular the nature of the capitalist state.

There is also, and this is replicated in contemporary debates about violence in social movements, a tendency to create a false polarisation between violence and nonviolence. In fact, many of the movements illustrated show their is an interplay, and on occasion there is a grudging acknowledgement that at times violence played a part in the successful outcomes - one example is the South African struggle against Apartheid, where the authors show that the violent attacks on police and collaborators meant that state authorities were cautious about entering many black areas.

The authors appear to be motivated by a desire to discredit revolutionary politics in the Marxist tradition, through their understanding of this is extremely crude - limited to suggesting that Lenin and Trotsky favoured violence simply because they thought revolutions had to be violent. In fact both Lenin and Trotsky understood that the nature of the capitalist state meant that it would have to be violently overthrown and a new state, capable of physically resisting counter-revolution created.

Finally the authors also create a false argument when they look at what makes movements successful. Highlighting strikes, stayaways, sit-ins and mass protest movements they seem to think these are somehow dismissed by other revolutionaries. In fact, it is precisely because workers have collective power to change society that socialists constantly emphasise the need for more strikes and mass protests. Sometimes I got the feeling that the authors believed that only they understood this.

While it's been influential, I suspect that many people who have read A Force More Powerful found it interesting, but not particularly useful in arguing a course forward. Readers might want to look at some of the literature that comes out of the revolutionary Marxist tradition if they want a better understanding of what can make social movements successful.