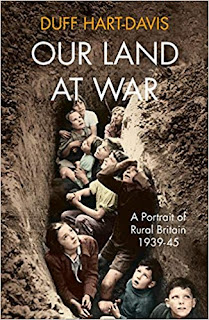 The Second World War was a transformative period for British rural society. The restrictions of wartime production, the expansion of agriculture, the massive increase in the use of mechanised vehicles for ploughing and transport began the transition to an industrialised landscape in the 1950s. There were tremendous social changes too - as women worked the land and forests in huge numbers - and agriculture communities lost population to the armed forces and war industries.

So it was with interest that I picked up Duff Hart-Davis' book on rural Britain during the World War Two. But it is with great disappointment that I finished it. The book is constructed with a series of chapters looking at different aspects of the author's topic. Unfortunately these chapters are marred by two problems for those interested in agricultural history. Firstly most of the content is in the form of interesting (and entertaining) anecdote, and secondly many of the chapters and contents are only loosely connected to the topic.

For instance there are about 15 pages devoted to the Women's Land Army and about ten to the (often neglected) Women's Forestry Service and the Forestry Commission. But more devoted to the impact of the war on sports (is what happened to Lords' cricket ground anything to do with the rural experience at all?) and hunting. The experience of women working in fields and forests was fundamental to the social changes that took place during the war, yet is reduced here to a mere handful of pages. Similar comments could be made about many other chapters. Do we really need to know about the debates about whether Churchill should join the Navy's flagship during D-Day? Or the experience of animals at London Zoo? Or the details of V1 bombs landing on London? Almost a chapter of information on code-breaking at Bletchly Park is included apparently solely because the stately home was in the countryside.

All of these are interesting, but are extremely peripheral to the subject matter, and are often only included because of a tenuous link (V1s and V2s did land on fields sometimes...) Even when more anecdotes would have been illuminating we learn precious little - for instance there must be much more to say about the role of prisoners of war in the countryside than the handful of pages here.

It must be said that many of the anecdotes and short stories are highly entertaining, but give us barely a snapshot into wider experiences. While Hard-Davis does acknowledge that there is a major transformation going on, he tends to see this in a romanticised way - a golden era of old ways disappearing never to be returned. In fact romanticism pervades the whole book - lots of young boys exploring crashed bombers while out blackberrying.

Yet we learn nothing really about how the War changed agriculture. Did those years improve lives? Did they ultimately make Britain more or less dependent on imported food? What happened to wages, housing and living conditions?

If you want another highly romanticised view of life in wartime based on a few amusing anecdotes then this will while away a few hours. Otherwise avoid - you'd be better reading the chapters in Angus Calder's The People's War devoted to the countryside and Alun Howkin's excellent book The Death of Rural England.

Calder - The People's War
Calder - The Myth of the Blitz
Kynaston - Austerity Britain 1945 - 1951
Howkins - The Death of Rural England
Posted by Resolute Reader at 2:11 pm