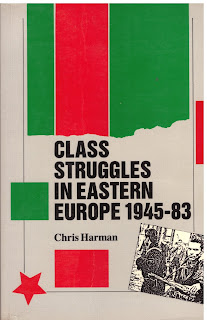 I was motivated to re-read Class Struggles in Eastern Europe by two anniversaries. The first was the 30th anniversary of the fall of the Berlin Wall - the emblematic event of the great transformations that shook Eastern Europe and the Soviet Union from 1989 to 1991. The second date was the tenth anniversary of the death of Chris Harman himself, a socialist and revolutionary who dedicated his life to the struggle for socialism from below.

It is this second aspect of Harman's life - the belief that socialism was the "emancipation of the working class, by the working class" which shapes this book. Harman, like others in the International Socialist tradition, argued that the states of Eastern Europe were not "socialist" or "communist" but "state capitalist", something he argues here was not simply a arbitrary name but a "definition, in the full meaning of the word". He continues:


The term 'state capitalism' captures the essence of the East European societies because it locates within them a dynamic which determines their historical development - the dynamic of competitive accumulation.

It is the competitive accumulation, caused by East European economies' competition with the "capitalist" western economies and lead by a bureaucratic class which drove the attacks on living standards, wages, freedoms and democratic rights, which encouraged the struggles described in the book. As Harman explains:


Without the drive to accumulate, there is no explanation as to why a motley collection of planners, managers, party leaders, generals and police chiefs come to form a solid phalanx, united under a single discipline in opposition to the demands of the rest of society.

Harman writes that there are two general myths that covered how people viewed the Eastern bloc (before 1989). The first, from some on the left, was the idea that these were socialist societies of one form or the other. The second, more generally from the right and their media mouthpieces, was the idea that these societies were frozen in time, lacking freedom where dissent was ruthlessly held down by near unstoppable security forces.

Yet, as the book shows, Eastern Europe from the imposition of bureaucratic rule was shaped by class struggle. Strikes, protests, occupations and insurrection were relatively common as ordinary workers and peasants fought for more rights and better living conditions. Class Struggles in Eastern Europe begins with a short history of the development of the Eastern Europe regimes. These arose, not from the mass struggles of workers and peasants, but from military imposition by Russia, and it was the Soviet Union that initially shaped (or reshaped) industrial economies in it's own interest - "[Russia] matched the Marshall Plan's consolidation of western capitalism in one half of Europe with their own form of consolidation in the other half".

The reality of "competitive accumulation" for Eastern Europe was regular, cyclical crisis. Over the decades covered, repeated attempts by governments to focus investment or cut wages failed to solve underlying economic problems - exactly like capitalist governments and companies cannot fix their own economies. The crises led to splits in the ruling class as different sections of the East European ruling classes, while united in their desire to maintain the system and continue to exploit workers, argued about different strategies. It was these splits that time and again gave workers' movements the opportunity to break through. As Harman writes about the East German workers uprising in 1953:


The SED leadership later complained that functionaries had 'fallen in to panic, had slipped into positions of capitulationism and opportunism in relation to the enemies of the party'. But the confusion of the functionaries was not an accident. It was the inevitable consequence of the splits at the top of East German and Russian society. And these splits were no accident: they flowed from the inner economic dynamic of state capitalist society, as the examples of Poland and Hungary three years alter were to show even more dramatically.

Or, writing about Czechsolavika in 1968:


The first strikes broke out at a time when the whole apparatus of bureaucratic control was in turmoil. This was reflected in the attitude of local bureaucrats to the strikes. One automatic reaction was to condemn the strikes out of hand ... But some sections of the bureaucracy saw possible benefit to themselves in the strikes. Junior managers often regarded them as a lever to remove more senior Novotnyite officials or to gain a degree of autonomy for the plant they controlled.

Of the "class struggles" described in the book many will be known already to readers. Two events stand out above the others. The first is the Hungarian Revolution of 1956, the second the experience of Solidarity in Poland in the early 1980s. The Hungarian Revolution deserves to listed alongside other great working class revolutions. Today it is usually remembered for the brutal intervention of Russian tanks, but 1956 was marked by all the elements of previous revolutions - mass strikes, demonstrations and workplace occupations and, crucially, the creation of workers councils which in the words of the British Communist Party's Peter Fryer, "bore a striking resemblance to the workers peasants and soldiers councils which sprang up in Russia in the 1905 revolution and in February 1917". But tragically, as Harman shows, there was a lack of any revolutionary minority that could argue for the seizure of power during the period of "dual power". In fact the leadership of the Hungarian workers' councils consciously avoided 'political decisions' leaving the existing state together with the armed might of the Russian military to retake the whole political space.

In Poland, there was no intervention from Russia,


precisely because of the depth and radical nature of the Polish movement compared to that in Czechoslovakia. They viewed a Russian military takeover of Poland as a very hazardous undertaking indeed. Poland was a much larger country with a much larger working class than Hungary or Czechoslovakia. Its population had historic traditions of armed resistance to invasions.

Yet the movement in Poland also failed to break through and was defeated, with its activists arrested, imprisoned and sometimes killed. In this case, while individuals were drawing revolutionary conclusions during the height of Solidarity's workers' revolt. There was also no political party capable of linking together the struggles and challenging the vacillations of reformist leaders like Lech Walesa who were terrified of radical action from below.

Writing about Hungary in 1956, but with words that are applicable to all the struggles he writes about here, Harman argues that:


The real significance of the Hungarian revolution does not rest in any attempt at a crude balance sheet, with workers' deaths on one side and economic gains on the other. It is to be found elsewhere. The myth that 'totalitarian', state capitalist societies are immutable, with their populations brainwashed into acquiescence, was smashed once and for all. Hungary proved that the Stalinist monolith itself bred forces that could tear it asunder.

The last part of the book is a discussion of why, in both east and west, accumulation leads to crisis and, often workers resistance. Harman lays out an argument that any relief for the rulers of the Eastern bloc would only be short. In 1989 the Iron Curtain collapsed in a few months as ruling classes were no longer able to solve the contradictions of their society and prevent reform or revolution. But if Harman's arguments about State Capitalism seem less important today, his wider theme - the need for activists to come together in revolutionary parties in order that the next struggle is victorious - remains utterly crucial. Class Struggles in Eastern Europe is a brilliant explanation of the importance of revolutionary organisation, through these forgotten accounts of workers' struggle.