Hallgrímur Helgason - The Woman at 1,000 Degrees 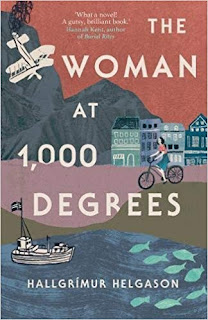 This unusual and highly entertaining novel begins with the hero Herra Björnsson, near bedridden and living in a garage in her eighties with nothing but a laptop, her memories and a hand-grenade. It wasn't until I'd finished the book that I'd appreciated that it was based in truth - the story of  Brynhildur Georgía Björnsson whom the author met on the phone when he was telephone canvassing for an election. Brynhildur's father was one of the few Icelanders who fought for the Nazis in World War Two. I have yet to find out precisely how much of the novel is historically accurate, but the books character tells the story of her life interspersed with contemporary events when she is mainly entertaining herself by pretending to be a much younger woman online.

As a young girl Herra is trapped on continental Europe by the outbreak of World War Two. Through a series of misfortunes she finds herself a refugee in various parts of Eastern Europe and Germany itself. Her father is a fanatically follower of Hitler who joined the SS and then loses Herra in a British bombing raid. The book tells of her experiences - both while lost in rural Eastern Germany and while an outsider living among the Germans with her mother. While the book is run through with humour, its also deeply honest about life as a refugee for a young woman in wartime. Rape and murder are part and parcel of Herra's life and on returning to Iceland she cannot cope with peacetime and those around her who've escaped the war's ravages.

The story of how Herra becomes the woman in the bed with the hand-grenade is beautifully written and very poignant. From wartime Germany to Argentinian farms and Iceland's fishing villages it's a story of how we are shaped by the world we are in, and the relationships we have. It's also a story about Iceland's place in the wider world - and how the nation was buffeted by wider imperial interests and the economic world. It's a lovely book - funny, poignant and difficult in places - but well worthwhile.
Posted by Resolute Reader at 8:37 pm