Robert Heinlein - I Will Fear No Evil 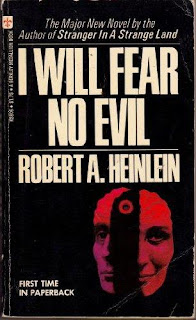 As I described in my review of Farah Mendlesohn's critical biography of Robert Heinlein, The Pleasant Profession of Robert A. Heinlein I have an ambiguous relationship with his novels. But Mendlesohn's repeatedly returns to a major novel by Heinlein which I had never read - I Will Fear No Evil and given what she says I felt I ought to read it before, perhaps, coming finally to terms with Heinlein.

First published in 1970 and written in 1968-1969 it bears all the hallmarks of that period. It focuses on the life of Johann Smith, an extremely wealthy billionaire (though he is implied to be even richer than that sounds today) who is coming to the end of his long life. Heinlein uses age, as he does in several of his books, to allow characters to comment expertly on the present through their experiences of the past. So at one point Smith's eventual character visits the home of a poor family and shows how to cook using "depression cooking" despite not having cooked for them-self in decades.

At the end of his life, Smith, uses his wealth to have his brain transferred to a replacement body. By coincidence the only person able to make this donation is the recently murdered, extraordinarily beautiful Eunice who was Smith's secretary. Once in Eunice's body, Johann (who renames them-self to Joan) appears to co-exist with Eunice in the new body's brain. Many reviews discuss whether or not this is meant to be real, or some form of psychosis on the part of Johann. I'm not sure it matters for most of the book (except, perhaps the ending). Of more interest is what Heinlein does with it.

The problem is that Heinlein isn't really being all progressive here. In fact what bothered me was two fold. Firstly Joan's rediscovery of the joys of sex, and the expansion of horizons that takes place, seems very much designed to please the males she knows. Joan enjoys the sex, but their enjoyment is almost secondary to ensuring the male partner is having a good time. Secondly, and linked to this, is that Heinlein uses a rather standard trope when it turns out that almost all the women around him before the operation were actually desperate for sex all the time and had hidden, vigorous sex lives. This isn't of course a bad thing. But Heinlein's use of this appears designed to titillate his readers, a sort of "every woman is read to have sex with all men as soon as it is offered". Heinlein takes this to extremes - one of his female characters enjoys a gang rape for instance. Mostly it is about Joan kissing, screwing and flirting with everyone they meet. It's particularly unsettling for some characters as Joan has Eunice's' body and they knew her before the operation. I found the section when Joan visit's Eunice's former partner quite disturbing as a result.

Written in the late 1960s when questions of sexuality and freedom were increasingly being discussed. Heinlein is both reflecting the wider world and putting his own spin on it, which in hindsight looks somewhat conservative. Behind all of this is the urban decay of America. Jobs are hard to come by and even illegal work is actively taxed. Drugs and illiteracy are a major social problem and Johann/Joan are able to hide from all of this - literally fencing themselves off through their wealth. Johann, and then Joan, also use their wealth as a means to buy off their own guilt - paying cash to those they like who are living in poverty - including Eunice's old husband. Though this is strictly for those who deserves it - Eunice's former mother in law gets nothing as she's an alcoholic on welfare.

Unusually for Heinlein there are no cats, though blood transfusion plays a big role (Heinlein was a major advocate of blood donor-ship - though here the metaphor is closely linked to the donating of a body). There is also only a passing mention of incest; though Joan impregnates herself with Johann's stored sperm - effectively becoming, at the end, mother and father of their own child.

Many of Heinlein's grander themes are explored here. For those trying to understand him, it's an essential read, but its marred by Heinlein's own limitations - politically, culturally and socially. Leaving aside the bad erotica, it seems initially to be somewhat progressive, but I don't think it is as progressive as the author thought it he was being. Far more interesting and innovative writing would come out of the new movements for liberation. Ironically, as I read the second hand edition I had, it literately fell apart in my hands. It felt like a fitting end to my engagement with Heinlein.

Mendlesohn - The Pleasant Profession of Robert A. Heinlein
Heinlein - Stranger in a Strange Land

Heinlein - Starship Troopers
Mitchison - Memoirs of a Spacewoman
Posted by Resolute Reader at 9:59 am