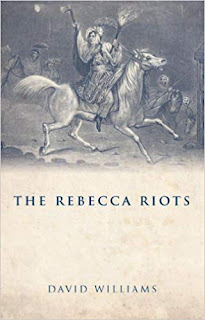 The Rebecca Riots are some of the most famous examples of rebellion in Welsh history. For a brief, intense period, the Welsh countryside was aflame with resistance as large groups of rebels, frequently disguised as women, destroyed toll gates, threatened the forces of law and order and made a mockery of the authorities attempts to catch the rebels. This classic book was first published in 1955 and has been reprinted regularly since. It is easy to understand why - it's a comprehensive account of the Riots that puts events into their economic and historic context, but doesn't fail to neglect the telling of a brave and remarkable story.

The book begins with a detailed look at the Welsh economic situation in the first decades of the 19th century. This was a period of intense poverty, and great transition. Wales from moving from being an agricultural economy to one dominated by industry. As with other parts of the British Isles, the development of industrial capitalism led to a transformation in social relations in the countryside. As the need to move goods and raw materials, messages and people around Wales increased, one aspect of the changing world was the need to maintain an adequate system of roads. The responsibility for this was, as David Williams explains in detail, devolved to private companies of individual investors who would pay for road upkeep through the maintenance of tolls.

These tolls had a dramatic impact upon the local population. Depending on whether a cart or a herd of animals were being moved, farmers, traders and businessmen had to pay to move their materials. These tolls were high, and due to the multiplicity of companies, could be levied multiple times for a single journey. Taking inspiration from the Bible (Genesis 24, 60) "And they blessed Rebekah, and said unto her, Thou art our sister, be thou the mother of thousands of millions, and let thy seed possess the gate of those which hate them." mass protests threatened the toll companies and then smashed them down.

Williams argues however that the riots against toll gates weren't an isolated example of rage at the owners. Instead, "the Rebecca Riots were the growing pains of a new society, an example of the disturbances which so often accompany any change in the social structure." Thus the riots cannot be separated from earlier struggles against tithes, evictions and poverty. Nor can they be separated from the growing numbers of struggles over pay and conditions in the new industries, however as Williams stresses, Rebecca was led, not by the working classes, but by small farmers - though workers and agricultural labourers certainly took part in the protests. Rebecca's "success" argues Williams, led to a "general breakdown in society". But he continues by arguing that other forces also rose up. His description of these as "scum" is unfortunate and unfair. In a highly poverty stricken society of deep class polarisation it is not surprising that a small number of individuals used the opportunity of chaos to settle some scores. More interestingly the riots were also accompanied by other demands. A journalist at The Times managed to gain entrance to a secret mass meeting of Rebecca's followers and noted (via an interpreter) that


The grievances included the toll-gates, the tithe, church rates, and high rents. But Rebecca also resolved that no Englishman should be employed as a steward in Wales (for the landlords had made a practice of importing English and Scottish stewards who would be out of sympathy with their tenants. Farmers were urged not to get into debt, but, if any man endeavoured treacherously to obtain his neighbour's farm, or took a farm which had been given up because the rent was too high, 'the Lady' must be acquainted and encouraged in her exertions. 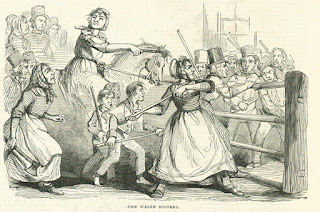 Once again, I was struck by parallels with other agrarian rebellions in the British Isles - the threats against those who took over farms vacated by others mirrors struggles in the 1820s in Ireland, and there are multiple examples of anonymous threatening letters from England and Ireland.

Williams finishes by highlighting the very real success of Rebecca. While a few individuals were punished for their involvement, some with great severity, most were not and tolls were dramatically reduced, made uniform and crucially supervised by the County. Williams notes that remarkably, "for the next thirty years, South Wales enjoyed a better general system of roads than any other party of the country". Rebecca went down in local history as an inspirational period - quite rightly. It demonstrated that ordinary people could challenge the military forces of the state through their local knowledge, numbers and experience, and that small farmers, rural and urban labourers could work together. Crucially it proved that ordinary people could change the world for the better.