Jeannette Ng - Under the Pendulum Sun 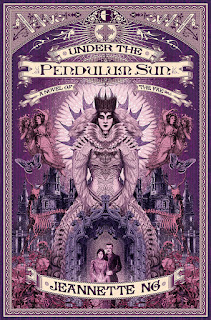 What would happen if Victorian England, in all its colonial glory, discovered fairy land? This is the intriguing basis for Jeannette Ng's new novel Under the Pendulum Sun. Catherine Helston is a classic example of her class. A young woman born into a middle class family, the daughter of a minister. Her beloved elder brother, Laon, follows their father into the church and becomes a missionary in the country of Arcadia - the land of the Fae.

Left behind in England, Catherine has little to do. Her upbringing has prepared her for a life of sewing, embroidery and tea parties. However when Laon's letters end she begins to fear for him, and eventually receives a letter from the missionary organisation asking her to try and find him. Once in Arcadia Catherine finds herself in a world that is both mysterious and constantly changing. Arcadia isn't simply another part of Earth, it's a place that can only be visited by getting lost (which is why Captain Cook found his way there on one of his voyages). It's a world that is utterly alien - the novel's title refers to the Pendulum Sun of Arcadia, that swings back and forth across the land.

Ng describes the world well. Inhabited by very strange characters and creatures, Catherine has to battle to escape being trapped in a pastiche of her life in England - stuck in a bizarre castle with a few strange characters, one of whom wants to discuss the finer points of Christian doctrine and the other who would mostly not tell Catherine any details of life, but instead take tea and sew.

Eventually Laon does return and Catherine and him find themselves in the midst of rather a complicated situation whereby the Queen of the Fae appears to be setting either a test, or a trap. There's a couple of twists to keep the reader hooked, though I thought the main plot turn was fairly expected. Ng portrays well the stifling nature of Victorian society for the female sex, and the simmering repressed sexuality for the middle classes.

More interestingly I was struck by a number of themes here. One of which is the neat way that Ng upends the dominant colonial mindset of Victorian England. During that period, the sun never set on the British Empire, and the British establishment want to extend that rule to Arcadia. Others are also interested - I loved the idea that Germany was building a railway to Arcadia consisting of a clockwork system to randomly move trains along points so they became lost.

The central ideology of the British Empire was that the English were the most superior race and everyone else was subsurvient. Yet in Arcadia their rules and methods don't work. Here Christianity makes no sense (despite the desperate attempts by Catherine and Laon to find the Fae in the Bible). Here military might is foiled by magic, and while there is much material to trade, it seems that Arcadia gets as much out of the exchange as the human world.

In the end Catherine and Laon find that they have no power in Arcadia. They have become living proof that British rule cannot extend into the lands of magic. But the nature of their Fall also means that they cannot ever return to their old lives. Under the Pendulum Sun is thus more than a simple novel of the Fae (to quote it's subtitle) but instead is quite a rather clever morality tale that shows what can happen to those who believe their culture is far superior to everyone else's. It's a great novel and despite a few errors that should have been caught in editing I enjoyed it alot.
Posted by Resolute Reader at 10:42 pm