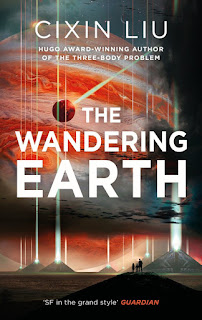 Cixin Liu has produced some of the most innovative and entertaining, as well as thought provoking science fiction that I've read in the last couple of years. So I was excited to pick up this volume of his short stories. Like his longer novels these are stimulating and in places unusual, as they subvert many of the established science fiction norms. The majority play around with various threats to Earth and humanity - some of these are natural and others are alien. The titular story considers how humanity might react to an sun that is about to destroy itself and its solar system. The solution, the moving of the Earth, is one that provokes intense debate and discussion. It might be read as a metaphor for the threat from climate change, as many people are swayed by denialism.

I was most struck by the rather poignant story Sun of China which follows Shui Wah on his journey from a tiny unremarkable, and extremely poor village into space. It is very much a story of modern China as Wah travels away from home trying to find work and make his fortune. His eventual employment as a window cleaner on one of Shanghai's numerous steel and glass tower blocks leads him into space. While the story is one purely of Wah's success and personal achievement its wider context is the conquering of space for ordinary working class people - the people who end up doing the maintenance and support for China's space enterprises. Cixin Liu cleverly links the ambitions and successes of Wah, together with the needs of space based economy. How do the capitalists make space travel cheap enough that they can get their labour into orbit?

Taking Care of God explores the return of the "Gods" from space. Gods in this context though are super-beings who firstly seeded Earth and now return seemingly to retire. As with all of Cixin Liu's stories it is multilayered, but raises real questions about how ageing societies, even ones that have conquered interstellar travel, can continue in the face of limited resources.

Several of the stories explore themes that will be known to readers of Cixin Liu's novels, particularly the Remembrance of Earth's Past trilogy. The idea of "bubble universes" and time travel through hibernation are explored in different ways to the trilogy, but make for entertaining plot premises in themselves. The last two stories in the book are slightly linked, but very different tales. The penultimate one is unashamedly sentimental, and discusses the age old theme of an explorer isolated as an individual but still in contact with the rest of humanity.

The only story I didn't particularly like was Devourer which deals with a external threat to Earth as an alien spacecraft approaches intent on destroying Earth for its resources. There are very strong similarities to Cixin Liu's classic Three Body Problem especially in the high level human discussions about how to fight the aliens. If Three Body Problem followed Devourer, then I'm glad that the author used the short story to work through his ideas, as it doesn't quite come together here. Its treatment in that excellent novel is far superior.

All in all this is a strong collection that fans of Cixin Liu's other work will undoubtedly get a lot out of. I would recommend his novels as a starting point though.