Kyle Harper - The Fate of Rome: Climate, Disease & the End of an Empire 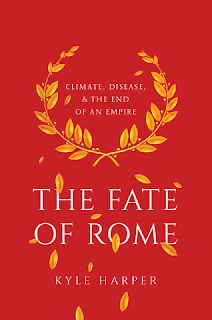 I have to admit that I began by disliking Kyle Harper's Fate of Rome. The initial prejudice was because of Harper's use of Malthusian ideas as the intellectual framework for his discussion of Ancient Rome. Reading a book published in 2017 I was surprised to find big chunky quotes from "Parson Malthus" not least because his ideas have repeatedly been challenged and shown wanting.

Persevering with the book however I began to find much of interest. Harper does not abandon his Malthusian positions, but his study of the impact of environmental change and disease on the Roman Empire has much of interest. Harper argues that the fall of the Roman Empire was the "single greatest regression, in all of human history". This was, he says, the result of the contradictions of the Empire coming together with a period of climate change and disease which repeatedly undermined the Empire's rulers' ability to maintain the system.

There are several interlinked contributing factors. The first of these is the environmental context. Harper argues that the Roman Empire arose in a particularly benevolent environmental era - the Roman Climate Optimum (RCO). The RCO is:


poorly defined in time and nature. The chronological boundaries proposed here, ca. 200 BC - AD 150, are a coarse abstraction imposed on a range of evidence, but not arbitrarily. They allow us to describe a phase of late Holocene climate defined by global forcing patterns and a range of proxies displaying some coherence. Buoyed by high levels of insolation and weak volcanic activity, the RCO was a period of warm, wet and stable climate across much of the vast Roman Empire.

In other words, the RCO allowed big surpluses of food to be grown, agriculture to expand and there were reduced natural disasters to threaten the early Empire.

However the urban nature of the Roman Empire created disease ecologies. The concentration of large numbers of people, in towns and cities that often overwhelmed the sewage systems provided opportunities for disease to flourish. Without any understanding of how disease spread or germ theory, there was little the Romans could do once disease took hold. The results could be devastating. During the Antonine Plague, a disease that was probably small pox, around seven million people died.

The relationship between climate and disease "is not neat and linear". Harper gives us a few examples of how climate change fed the growth and virulence of disease. But his main thesis is that the Roman Empire had little or no protection against disease when it came, and because it was constantly pushing against a Malthusian limit, the results were always catastrophic. While the Empire saw a series of deadly plagues and outbreaks of disease, it seems that the final nail in the coffin was a series of outbreaks in the 500s. In 544 the plague lead to an "unprecedented fiscal-military crisis". The Roman Empire, hitherto reliant on its massive army was unable to mobilise the troops it needed. The repeated outbreaks of plague undermined the viability of the state itself:


The violence of the initial wave reversed two centuries of demographic expansion int he blink of an eye. Then the persistence of plague for two centuries strangled hopes of recovery. If we imagine... a normal growth rate of 0.1 percent per annum leading into the first wave, 50 percent total mortality in an eastern Roman population of 30,000,000, and thereafter a combination of quick recover rates (0.2 percent per annum) and smaller mortality events (10 percent mortality events every 15 years...), the power of the subsequent amplifications to maintain the population at low levels is apparent.

It is difficult to argue against this scenario. But I want to suggest that things were a little more complicated. One thing that is missing from Harper's book is any real discussion about the limitations of Roman society itself. This was a slave economy - the wealth of the Empire was built, in large part, from the labour of slaves. This was a very real limitation on the ability of the Empire to keep expanding, and caused major internal contradictions. The particular nature of Roman society - its highly urban character - arose from the nature of its productive base. The huge populations mentioned are there because there are lots of slaves in the economy. There is nothing here about the interaction between the different classes - the tensions in the cities that meant Emperors had to constantly think about appeasing the mob, the slave revolts, or the condition of the peasantry. One of the strengths of Mary Beard's recent history of Rome is that she points out that the vast majority of the Roman population worked all their lives until they died. Tensions between those at the bottom of society and the one percent were a constant concern for the ruling classes - yet the nature of Roman society is minimised in the face of the external threat from climate and disease. While it would be wrong to ignore these factors, to reduce the rise and fall of a civilisation simply to them is inadequate. Writing about the barbarian attacks on Rome Harper writes:


We need not go in for monocausal explanations. The coming of the Huns did not, by itself, spell the doom of the western empire. In the end the Huns conquered very little, and the effect of their entrance onto the scene must be measured within the particular circumstance that they encountered.

What is true of the Huns is also true of climate and disease. Their impact must be measured against the nature of Roman society that made it vulnerable. In this Harper's book proves inadequate. The reason for this inadequacy is that Harper's starting point is Malthusian - that every human society faces a brick wall against which it constantly presses, and mass hunger (or ecological crisis) is just around the corner. Karl Marx pointed out that the problem with Malthus was that he ignored the economic and social context. As Marx wrote:


overpopulation is... a historically determined relation, in no way determined by abstract numbers or by the absolute limit of the productivity of the necessaries of life, but by limits posited rather by specific conditions of production. As well as restricted numerically. How small do the numbers which meant overpopulation for the Athenians appear to us!

Despite my disagreement with his thesis, I found much of interest in Harper's book. After finishing it, I read Caesars account of the Conquest of Gaul and I was pleased to note a bit when Caesar complains that the barbarians constantly mock the Romans for their short stature. Harper explains that Roman society was inherently unhealthy. Statistical studies of bones show that the coming of the Empire led to smaller stature. People were taller before and after the Empire, but while it ruled their region they were less healthy and were thus shorter. Such details and Harper's detailed studies of the impact of disease on the Roman Empire are fascinating. But the book is undermined by a weak theoretical framework.