Lewis H. Berens - The Digger Movement in the Days of the Commonwealth 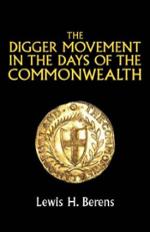 First published in 1906 this is an important study of the ideas of one of the most important radical thinkers of the English Revolution, Gerrard Winstanley. The edition I'm reviewing here is reprinted 2007 by Merlin Press and is a very useful overview of Winstanley's life and, most importantly, his ideas.

Winstanley is best known for leading a group of activists, the Diggers, in an attempt to create a radical agrarian society by creating a "colony" of like minded people on St. George's Hill in Surrey. Less well know is that Winstanley had developed a clearly thought through vision of how a network of such colonies could form the basis for a society of equality and freedom. The execution of Charles Stuart during the English Revolution helped encourage Winstanley's thinking along this direction. Many of his writings were made in response to events on St. George's Hill and the second colony that Winstanley created nearer his home in Cobham, after they were driven away from the hill.

Berens' makes it clear that, like many radicals of the time, Winstanley had a very clear understanding of society in the 17th century which helped fuel his radical visions of a new world. He rages against the inequality and oppression of class society. In 1648 he writes:


And this is the beginning of particular interest, buying and selling the Earth from one particular hand to another, saying ‘This is mine,’ upholding this particular propriety by a law of government of his own making, and thereby restraining other fellow-creatures from seeking nourishment from their Mother Earth. So that though a man was bred up in a Land, yet he must not work for himself where he would, but for him who had bought part of the Land, or had come to it by inheritance of his deceased parents, and called it his own Land. So that he who had no Land was to work for small wages for those who called the Land theirs. Thereby some are lifted up in the chair of tyranny, and others trod under the footstool of misery, as if the Earth were made for a few, and not for all men.

Winstanley understands that wealth comes from the labour of people and the rich get richer on the backs of others;


But all rich men live at ease, feeding and clothing themselves by the labors of other men, not by their own, which is their shame and not their nobility; for it is a more blessed thng to give than to receive. But rich men receive all they have from the laborer's hand, and what they give, they give away other men;s labors, not their own. Therefore they are not righteous actors in the Earth.

Berens' tells the story of Winstanley's life and struggles. More recent biographies have been able to make use of more sources and some of the conclusions about Winstanley that Berens' makes are probably no longer as clear cut as they were when he was writing. John Gurney argues, for instance, that links between Winstanley's ideas and Quakerism are much less clear than Beren's would have.

But the real joy in Beren's book is the writings of his subject. I was particularly struck by Winstanley's visions of agrarian Utopia. Arising out of the seizure of land by the ordinary people he imagined a world where the full fruits of the Earth would be available to all, through a system of decentralised villages. Storehouses would keep excess produce, overseen by "waiters" who would all those who need food or other goods to come and get them for free. There would be centralised government, each village required to produce a summary of its news at regular intervals which would be then distributed around the country so everyone would know what was happening. Officers would be elected and over-seers would ensure that everyone worked, though work was not intended to be excessive. While this was a patriarchal society, Winstanley also believed that people should be able to marry who they wanted and could do so easily when a couple wanted to.


When any man or woman have consented to live together in marriage, they shall acquaint all the Overseers in the Circuit therewith, and some other neighbors. And being all met together, the man shall declare with his own mouth before them all that he takes that woman to be his wife, and the woman shall say the same, and desire the Overseers to be witnesses.

Winstanley also saw a system of punishment that allowed the community to punish those who refused to take part in society, but also allowed those who broke the rules to return back to society. The death penalty was there as a final punishment for heinous crimes such as rape and murder.

Winstanley's Utopia, was an agrarian ideal. But it was based on a rational examination of the existing problems of society and communal rural life. Based on a rejection of private property his early Communism could never succeed as it meant challenging the wealth and power of those classes that the death of Charles had put in the saddle. Winstanley's pacifism meant he ultimately believed his new society could come about by simply stating clearly enough how well it could work. Unfortunately this would never convince those with wealth and power, and there was as yet no class in society powerful enough to overturn them.

But Winstanley's vision remains inspiring and his writings are entertaining and illuminating. Its excellent that this old book has been republished. Sadly in places the Merlin edition suffers from proofreading issues. These aren't significant enough to detract entirely, but are disappointing. That aside, students of radical ideas during the English Revolution will be pleased to find this available.