Colin Dexter - The Dead of Jericho 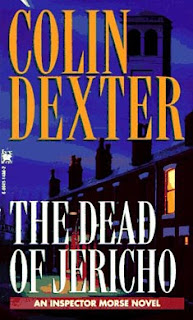 I was struck while reading The Dead of Jericho that Inspector Morse isn't actually a very nice bloke. In fact, he's actually a bully towards his subordinates, he's condescending towards women in particular, and men that he thinks intellectually beneath him and he's arrogant to the point of distraction. It's a surprise that he's such a popular character.

The novel follows the usual Morse pattern. An obscure murder of someone that Morse has a tenuous link with, a series of inexplicable clues, and an intellectual process that finds an absolutely mind-bogglingly complex and unlikely solution, which turns out to be wrong. Finally the novel ends with the unlikeliest of suspects being arrested and Morse feeling ever more grumpy and discontent.

Jericho isn't a bad novel. It's entertaining in places, even while the plot seems very contrived. I felt a complete lack of empathy with Morse here, and saddened by the voyeuristic pleasure that the characters and the author seemed to get out of the tragic tale of the victim at the heart of the book.
Posted by Resolute Reader at 7:30 pm