John F. Richards - The World Hunt: An Environmental History of the Commodification of Animals 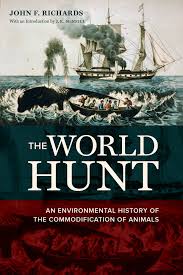 John F. Richards' book The World Hunt is actually four chapters from a larger work called The Unending Frontier. The four chapters deal with distinct subjects. The first two concern the surprisingly parallel stories of the transformation of North America and Siberia into a massive hunting ground for animals skins and fur. The third and fourth chapters look at the Atlantic cod fisheries of North America and whales and walruses in the northern oceans.

One common theme to all these accounts is the scale of the butchery that took place once particular animals became part of a wider European trading network. For instance,


the eighteenth-century export of deer skins from Virginia, the Carolinas, Georgia, Florida and Louisiana conformed to the classic pattern of market-driven raw materials exploitation. At a conservative estimate, pelts shipped by British, French and Spanish traders each year rose form 50,000 at the turn of the century, to 150,000 in the 1730s, to peak at 250,000 to 300,000 per year in the 1760s and early 1770s.

Similar, consider the hunt for whales and walruses:


Around the end of the eighteenth century, observers counted about 270 ships with twenty-two hundred Russian hunters gathered during the summer season at Spitsbergen, What their annual catch might have amounted to is impossible to estimate. We do have figures from one Russian hunting party that wintered on Spitsbergen in 1784-1785. When they returned they had tusks and hides from 300 walruses as well as oil and skins from 230 seals, 150 polar bear skins and 1,000 fox skins. They carried 300 kilograms of eiderdown. They also had killed 100 beluga whales and 1 larger whale.

The consequences for the ecology were profound. But for the original inhabitants of Siberia and North America the result of the encounter with Europeans and their trading systems was violent and traumatic. Hundreds of thousands of people lost their lives from violence and disease, and many more suffered as their economies became closely fixed to European and Russian interests. Isolated hunter-gatherer communities in Siberia suddenly found themselves being required to hunt in order to pay taxes in kind to the Tsar. These changes fundamentally altered communities that had previously only hunted to provide for their needs.

In North America, native people became a cheap source of labour as proxy hunters, many of them becoming dependent on this trade through their need to purchase goods and alcohol from the Europeans. Their traditional hunting and agriculture were destroyed in the search for profitable furs and skins.


Although the Creeks adapted quickly and successfully to the new incentives of the deerskin trade, they, like other Indian hunters in the Southeast, faced a basic contradiction. Economic and political forces made it imperative that they deliver a maximal number of deer skins every year. They became market hunters linked into the world market who used muskets to avidly pursue as many deer and bear) as possible.

Richards highlights the way that the native people's lives became dominated by market interests over in Europe. But in my opinion he fails to demonstrate how their attachment to this new global market transformed their own social relationships. This is not simply about "Indians" losing "restraints" on hunting. But how their perception of nature is transformed as their economic relationships become dominated by the market. Richards mentions the Montagnais peoples of north-eastern Canada, but may have missed Eleanor Burke-Leacock's study which showed how their involvement in the French fur trade transformed their whole lives.

In my opinion this is one of two great weaknesses of the book. The second is that Richards fails to adequately explain why the commodification of nature takes place. Why is there a sudden and insatiable desire for fur in Europe? What is the driving force that makes hundreds of ships suddenly start travelling to hunt whales at the end of the 17th century?

The missing component is an analysis of capitalism and its need to make profits. This explains, in part, why all these hunts explode at a particular point in European history - the moment when capitalistic relations are coming to dominate even in those countries like Russia that haven't left the old feudal order behind. It also helps to explain why some states put enormous resources into subsidising their whale or fishing fleets. So in the end Richards quite rightly can conclude that "the biomass of the Arctic translated into energy and profits for Europeans" but leaves the reader unclear as to why this happened. As a result of this much of Richards' book becomes lists of numbers of animals killed, ships sailed and profits made.

Charitably I would suggest that this weakness is a result of the plucking of four chapters from a larger book, and The Unending Frontier has far more analysis. I hope so, because there's much of interest here that makes me want to read the larger work.