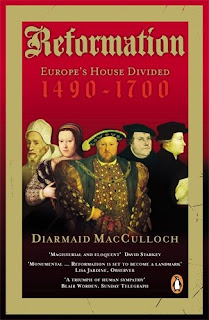 Diarmaid MacCulloch's Reformation is an impressive and monumental achievement. It's massive size reflects the scope of the material covered - over two centuries of detailed history of countries from Ireland in the west, to Poland, Lithuania and Transylvania in the east. As well as Spain, Scandinavia and Italy. The book even touches on the impact of the Reformation for those who lived in the Americas and those who emigrated there (as well as the slaves who were brought there).

For MacCulloch the history of the Reformation is very much one of ideas. It's the changing attitude to the Church and its activities that drives the Reformation, but the Reformation in turn drives all sorts of other social, political and economic processes. He writes:


The old Church was immensely strong, and that strength could only have been overcome by the explosive power of an idea. The idea proved to be a new statement of Augustine's ideas on salvation. That is why there is so much description of apparently abstract thought in my account of the Reformation... Monarchs, priests, nuns, merchants, farmers, labourers were seized by ideas which tore through their experiences and memories and made them behave in new ways... Social or political history cannot do without theology in understanding the sixteenth century.

It is of course true to say that you cannot understand this period of history without understanding the ideological changes, and the ideas themselves. But I fear that MacCulloch reduces history down to "the idea" without really getting to grips with the thorny question of why it was in the 16th century such diverse groups of society would accept them and drive the change onward.

Of course, some of this was about the role of individuals. MacCulloch highlights the contribution of men like Luther:


He spoke at so many different levels: he debated with scholars, shouted from the pulpit, wrote vigorous German and sang his message in German hymns and songs. Perhaps the hymns were the most persuasive to the wavering because they were the least polemical. Luther's impact was naturally greatest on his fellow German speakers, but it was much wider than that in the 1520s. It was not just he impact of print, vital through it was: the Reformation was a matter of the spoken and sung (some might say, the ranted) word, as much as the word on paper.

But here again, MacCulloch fails to explain why these words had such power. I believe this is why a materialist historical analysis is so important, because it can show how the new ideas fitted more closely with a changing economic world - one based increasingly on trade and manufacturing for the accumulation of wealth. The beginning, in other words, of the capitalist era.

This isn't to say that MacCulloch's work is not without value. It is a detailed history and it's 700+ pages are packed full of history that repays study. The idea of the Reformation and the Counter-Reformation as Europe spanning movements that transformed the whole world eventually works well in this format. MacCulloch's historical knowledge is as clear when writing about 16th century Poland as events in England, Scotland and Ireland a century before or after. MacCulloch is also an entertaining writer, and his account is full of details of the lives of ordinary people as well as the rulers. Indeed the final chapters are an examination of the way that the Reformation changed people's lives in such important matters as marriage, love and sex.

On occasion MacCulloch's historical method lets him down. It is a simplistic analysis that links the violence of "twentieth-century Belfast, Mostar or... Rwanda" with the St Bartholomew's massacres in Rouen and Antwerp. Reducing these conflicts simply to "hatreds" between different religions is inadequate.

But MacCulloch is right to point to the importance of these changing ideas. As were the ruling classes of the 16th and 17th century. MacCulloch quotes one of Charles I's generals, WIlliam Cavendish, "The Bible in English under every weaver's and chambermaid's arm hath done much harm... for controversy is a civil war with the pen which pulls out the sword soon afterwards."

While there are many criticism's to be made of this work of history, it has much that will repay the reader, particularly those trying to get a sense of the sweeping changes that took place in Europe in this period, ones that had profound impacts on the people of the whole globe.

Fletcher & MacCulloch - Tudor Rebellions
Wilson - The People and the Book
Tawney - Religion and the Rise of Capitalism
Posted by Resolute Reader at 11:48 am