Paul McAuley - Something Coming Through 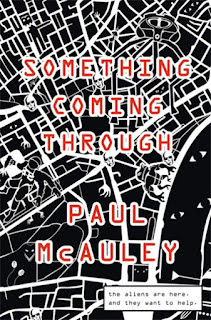 Reading Something Coming Through delighted me in many ways. Not least because it reminded me that there is new, interesting and challenging science fiction out there - the trick is, of course, to find it. Part science fiction novel, part detective-noir and very tightly written, this is a surprisingly left-wing novel that with tongue firmly in cheek, challenges the reader's expectations.

Firstly there is the protagonist. Few science fiction and detective works have a female hero, and Chloe Millar is one for the 21st century. Paul McAuley avoids the twin stereotypes of female lead characters - she's neither incompetent, nor superbly energetic and trained in twelve types of martial art. Just an ordinary woman, trying to do her day job, plunged into incomprehensible situations.

Secondly there's the circumstances. I understand that McAuley's set a number of short stories in this universe where the alien Jackaroo have appeared to humanity and given them fifteen worlds and a regular shuttle service to colonise them. These fifteen worlds have the archaeological remains of dozens of forgotten and extinct species and clearly the Jackaroo are keen to have humanity as their latest acquisition. They're delightfully enigmatic, and Earth has benefited (or at least had the chance to benefit) from alien technology. McAuley manages to seamlessly insert this into his descriptions of a not too distant London.

But London, in McAuley's near future is not what it could be. Trafalgar Square was obliterated by a nuclear weapon a few years before the story, and the world and its people have fallen victim to climate change and pollution. We learn in passing of the climate refugees living in shanty towns in Norfolk having fled a flooded Netherlands. We also learn of the rogue alien plants that clog up the rivers and oceans. Not all alien imports are beneficial.

All this would make for a great setting. But McAuley alternates Earth's story with tale of a detective Vic Gayle out on one of the Jackaroo planets. Gayle is hunting a murderer, linked to illegal trading in alien artifacts. The brave-new world is anything but, Earth's colonists have brought with them everything from McDonalds to corrupt politicians. The juxtaposition of this world with that of Earth is brilliantly done, and McAuley brings the two strands of the story together neatly.

There's much else to enjoy here. I particularly liked the right-wing, anti-alien politician, clearly modeled on a contemporary UKIPer, who has pulled the future Tories to the right, and campaigns against the negative influence of the Jackaroo on British culture. It all seems frighteningly real.
Posted by Resolute Reader at 7:21 pm