Oskar Hippe - ...And Red is the Colour of Our Flag 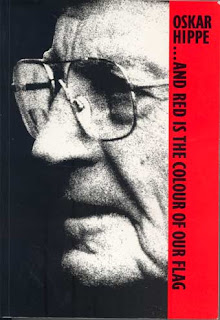 The life of Oskar Hippe is a fascinating one for Marxists and revolutionary socialists today. As a young worker in German during World War One, he became a socialist, becoming involved in anti-war protests as early as 1916. Later he would join the Spartakist League, the organisation setup by Karl Liebknecht and Rosa Luxemburg, but not being based in Berlin for much of the period, following his conscription in the latter stages of the war, he missed some of the key debates and battles of the early German Revolution. Nonetheless his eyewitness accounts are unique,


On the eve of 1 May 1916, my brother-in-law told me that we would not got to work the next day, since the workforce would all be joining an anti-war demonstration on the Potsdamer Platz. We went there at the specified time. Ten thousand workers had gathered in the square, and Karl Liebknecht spoke to them from the platform of the Potsdam local station. I do not know how long Liebknecht had been speaking when the police arrived. They could not do anything at first; the crowd prevented them from getting up to the platform. More and more detachments were sent in, including mounted police who rode into the crowd with enormous brutality. For a time, the demonstrators put up resistance, and many policemen were knocked off their horses.

Along with his unit, Oskar Hippe effectively mutinied and went home were he became centrally involved in the revolutionary movements in his home area of Halle. The book describes the scale of the revolution and the impact of the deaths of Luxemburg and Liebknecht, as well as the rapid emergence of the counter-revolutionary troops of the Freikorps.

As the 1920s developed, Hippe became an important activist in the German Communist Party (KPD). He was often targeted by the right and the authorities. Frequently blacklisted for trade union activity, the period becomes dominated by the struggles within the Russian organisation. Hippe describes the failure of the 1923 movement when revolution was perhaps on the cards, but the inexperienced Communist Party sounded the retreat on orders from Moscow. From then on his narrative becomes increasingly shaped by the battle with the Stalinist wing of the KPD.

The post-revolutionary period is also marked by the growth of the fascist movement. One thing that struck me reading the autobiography was that violence, or the threat of violence, was a daily reality for socialists. The socialists responded by arming themselves and being prepared to fight back, but it is notable that this violence was very much about defending and protecting the organisation, it's activists and allowing their planned activity to continue. This wasn't fighting for the sake of fighting, but in the interests of building socialist organisation. At the end of the 1920s Hippe breaks with the Stalinist KPD, and with many others works to build a new "Trotskyist" party. For some readers this may seem like a part of the book dominated by arguments among the left, but Hippe explains that this was about trying to keep the revolutionary tradition alive in a period where the rise of fascism is a real prospect, but with a huge and powerful German working class still unbroken.

With Hitler's victory, Hippe's group is forced underground and eventually he is imprisoned, serving many years of brutality and violence. Eventually he is let out and works on the northern coast of Germany, trying to make a few contacts with workers and discussing politics with captured prisoners of war. Hippe and his comrades bravery is outstanding in this period of difficult, dangerous underground work. This is no manual for this activity, but you get a sense of the dangers and difficulties, as well as the frustrations. Interestingly Hippe and his comrades believed that Fascism could not be over-thrown by German workers, who were now to weak, but would be over-thrown by defeat in a World War. It was an accurate, if pessimistic outlook.

Hippe then faced renewed persecution under the Stalinists. Initial hopes that a new mass socialist organisation could be built after the end of the war lead to a further period of splits, internal arguments and eventually underground work. Hippe once spent years imprisoned for being a "Trotskyist counter-revolutionary", and had to watch as others, including collaborators with the Nazi regime became senior figures in the East Germany state.

At the end of the book, Hippe's hope for the revolutionary over-throw of capitalism remain undiminished. It ends in 1979, though Hippe lived long enough to see the fall of the Berlin Wall. Hippe was an activist through the 1960s and early 1970s, saw the birth of a new movement and the emergence of a new left. Throughout he remained loyal to the central tenets of Marxism, and the ideas of Lenin and Trotsky, believing that the overthrow of capitalism had to be the act of the entire working class.

For those interested in the history of the left, as well as the German Revolution and the International Communist Movement this is a fascinating book, perhaps marred by what seems like a clunky translation. Hippe's account is perhaps unique and its worth trying to find this book.

Pierre Broué - The German Revolution 1917-1923
Fernbach - In the Steps of Rosa Luxemburg: Selected Writings of Paul Levi
Posted by Resolute Reader at 6:20 pm