Ralph Miliband - Parliamentary Socialism: A Study in the Politics of Labour 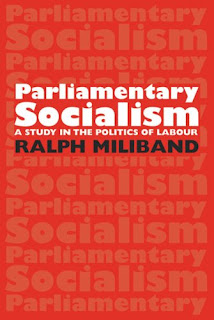 The election of the socialist Jeremy Corbyn to the leadership of the British Labour Party in September 2015 should have made every revolutionary socialist think through their understanding of that political party. For the tens of thousands of people joining, or rejoining Labour in 2015, this was a seminal moment. For years Labour had been dominated by slavishy pro-market, neo-liberal, pro-war politics, but Corbyn brought the prospect of something very new.

This is not the place to rehearse discussions on what Corbyn means for the left in Labour. There are other excellent pieces that do this. In trying to understand Corbyn, I turned to one of the "seminal texts" of the Marxist left in Britain, Ralph Miliband's pioneering study of the politics of Labour.

Miliband's book puts Labour's history into its wider context. This is the belief that change, even fundamental change, could come through a peaceful, parliamentary road. In fact, Miliband makes this a core argument, he points out that this reformist position was not something that developed later in Labour's history but was there from the start,


It did not take the Bolshevik Revolution or the Communists Party's involvement with the Third International and Russia to define the attitude of the leaders of Labour to any organisation which proclaimed its adherence to a revolutionary ideology. The attitude was defined from the earliest days of the Labour Party's existence.

In the early decades of Labour's existence there was a contradiction then. Labour's leaders would denounce capitalism and argue for socialism, but would do nothing to further the struggle on the streets towards that goal. In particular, Labour saw class struggle, strikes and protest movements as a distraction from the key work of getting Labour members elected to Parliament. Take for instance the huge battles that took place in 1919, when, in the aftermath of World War One, Britain seemed "on the brink of revolution". Miliband writes that three things were demonstrated


firstly, that a majority of Labour leaders remained as timid and cautious after the war as they had been before,. in some ways more; secondly, that a substantial segment of the organised working class was far ahead of its leadership in its willingness to challenge the Government; and thirdly, that while the Left wielded far greater influence than it had done before 1914, and could win temporary majorities at Conferences, it was not in a position to supplant the traditionalists.

The result of this timidness was that the Labour Party and the TUC pulled back from the sort of action that could have defeated the government and little was won, in fact, as Miliband notes, on the key question of the nationalisation of the mines, when the TUC and Labour decided against calling a general strike to fight for this, "it settled the issue, and much else as well, for twenty-five years".

The story of the first few Labour governments was equally bland. In Labour's first minority government, Labour was terrified of doing anything radical. Headed by Ramsey MacDonald, a man so scared of confrontation he apologised to the king for the singing of the Red Flag by MPs, and so desperate to be part of the establishment he strictly enforced dress codes and behaviour among his MPs, there was little that was likely to change.

By the time the General Strike of 1926 was betrayed by the TUC and the Labour leadership, the problem was well and truly obvious. The defeat of that strike lay not simply in an act betrayal, but something much more fundamental


But the notion of betrayal, though accurate, should not be allowed to reduce the episode to the scale of a Victorian melodrama, with the Labour leaders as the gleeful villains, planning and perpetrating an evil deed. The Labour movement was betrayed, but not because the Labour leaders were villains or cowards. It was betrayed because betrayal was the inherent and inescapable consequence of their whole philosophy of politics.

There was a fear (particularly from the union leadership) that the strike would get out of hand. More important though, "was the belief... that a challenge to the Government through the assertion of working class strength outside Parliament was wrong".

Part of the reason for this lies in the close links between Labour and the trade union leadership. The union bureaucracy, at one stage removed from its membership and the shop-floor, feels a pull on both sides. On the one hand it must articulate its members interests. But it must also feel the pressure from the bosses. The bureaucracy becomes a class in and of itself, economically and politically buffered from the working class struggles, it identifies less with the shop floor and more with managing the system. Challenging that situation means undermining its own position, making it harder to envisage.

Labour's origins from this class help create some of the conservatism within the parliamentary organisation in particular. But so does Labour's philosophy, identifying with the "national interest". During the period when a National Government, headed by the former Labour Prime Minister Ramsey MacDonald, was assaulting workers living standards on an enormous scale, Labour did little to challenge this, accepting the myth that such economic changes were needed for the greater good of the country. They didn't and, as Miliband notes, had Labour mobilised "effective opposition to the Government's policies, at home and abroad. The history of that terrible decade might have been different, perhaps decisively different, but for its deliberate refusal to do so."

The 1930s were low points for Labour. With his forensic examination of Labour Party policy documents and conference reports, Miliband shows how Labour systematically ignored what was taking place. From the conference reports of both the TUC and Labour in 1932, you would not know, that there were mass movements against unemployment taking place. Both organisations were not even involved in the unemployment movements, in part because they saw them as Communist Party fronts, but more so, because once again they were seen as distractions from getting Labour elected.

But today much of this is forgotten. One piece of history that isn't is the result of Attlee's government in 1945. Elected on a wave of hope after World War Two, and a rejection of Tory betrayals in the run up to the war, Labour seemed to promise much. It delivered lots too, a National Health Service, mass housing projects and the nationalisation of key industries. But even here, they pulled their punches. Miliband repeatedly notes that many of these changes were welcomed by the Tories who saw them as a necessity if British Capital was to modernise itself to compete once again on the world stage. In Labour's manifesto, published in 1945, Miliband reports,


A careful distinction was made between 'basic industries ripe and over-ripe for public ownership and management in the direct service of the nation', and 'big industries not yet ripe for public ownership'; these, however, would be required 'by constructive supervision' to further the nation's needs. And there were, thirdly, 'many smaller businesses rendering good service which can be left to go on with their useful work'.

This was hardly a major challenge to British capitalism. The manifesto might be looked upon with rose-tinted glasses from today's vantage point as both Tory and Labour governments have systematically privatised and dismantled the public sector, but as Miliband points out,"developments since, have invested it with a quasi-revolutionary aura, [but] it was, in its concrete proposals, a mild and circumspect document".


From the beginning, the nationalisation proposals... were designed to achieve the sole purpose of improving the efficiency of a capitalist economy, not marking the beginning of its wholesale transformation, and this was an aim to which many Tories, whatever they might say in the House of Commons, were easily reconciled.

Miliband's book continues the sorry tale until the 1960s. As Labour came out of the 1945 government, battered and weakened, having to use troops to cross picket lines and stepping back from any more radical proposals, further nationalisation went out of the window and the right-ward drift began. The author's account of the 1950s and 1960s were the book finishes are further dispiriting, with Labour accepting that British capital had to identify with the United States and supporting that country in Korea, and then, at least verbally, in Vietnam. In 1965, faced with a balance of payments crisis, Harold Wilson refused to devalue the pound, even though it would have provided some respite. Instead, a program of attacks on living standards were embarked upon, and in a revealing interview, Wilson explained why

Wilson here neatly sidesteps the question of the betrayal of trust of those who voted Labour hoping it would protect them from the worst of capitalism, and gives an interesting insight into a Labour PM's priorities.

Where does this leave us today? Firstly, Labour remains a reformist organisation. Its close links to the working class movement make it different to the Tories and while Corbyn clearly would like to go much further than recent Labour leaders, Miliband's book makes it clear that he is not as left as many earlier Labour figures. Corbyn is also trapped by a system, a parliamentary party that wants little to do with radical change and a parliamentary system that has, since Labour MPs first entered into it, done everything it can to foster the idea of slow, gradual activity and change.

Capitalism today is less interested in granting reforms. As crisis follows crisis, workers are always being asked to pay. Labour, despite the best intentions of Jeremy Corbyn and many of its members, remains trapped in that system. Fundamental, revolutionary change is needed more than ever. But what Corbyn has done is to create a space for the fragmented left to gain a hearing. For the first time in decades, socialism is being discussed across the country.

Those on the left outside Labour have a duty to work closely with those inside Labour to build and develop a new movement that can fight for change. Ralph Miliband' book on Labour's history will remain an essential tool in learning the lessons of the past and explaining why Labour cannot bring fundamental change. There are problems - in particular Miliband's focus on Labour means that on occasion he mentions events outside Parliament only in passing, which can be confusing for the reader. Nor does he deal in detail in this work on the question of the state and its action as a barrier to fundamental change. Finally I think Miliband doesn't explore enough about why Labour in government acts as it does. Nontheless this is an extremely important read today and one that every socialist, inside Labour and outside will benefit from reading in the coming months and years.

Newsinger - Them and Us: Fighting the Class War 1910-1939
Cliff & Gluckstein - Marxism and Trade Union Struggle: The General Strike of 1926
Molyneux - Marxism and the Party
Luxembourg - Reform or Revolution
Posted by Resolute Reader at 6:31 pm