Derek Wilson - The People and the Book: The Revolutionary Impact of the English Bible 1380-1611 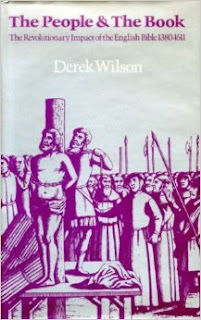 In reading and writing about the various historical rebellions that have taken place in the British Isles in the pre-capitalist era, it is notable how important the question of religion has been. Both the Pilgrimage of Grace of 1536 and the Prayer Book Rebellion of 1549 were inseparable from the question of the Reformation.This should not be surprising. How people understand the world and how they interpret or argue for change is sometimes inseparable from their religion, particularly in periods when religion was the dominant ideology.

Derek Wilson's 1977 book is a useful history of how the English bible came to dominant English religion. Today it seems strange that there should not have been an English bible. But if the dominant ideology is religion, then it is in the interest of the ruling classes to control the distribution of that religion. In  sixteenth century England that meant the bible was rare and not available in a language that the common people might understand. In fact, Wilson quotes a study of the wills of almost 900 East Anglian clergy between 1500 and 1550 and finds that only 17 owned a bible. Back in 1407 the Archbishop of Canterbury decreed that


no one henceforth on his own authority translate any text of Holy Scripture into the English or any other language... and that no book, pamphlet or tract of this kind... be read in part or in whole, publicly or privately

So the scene was set for those who wanted to understand the bible, or believed that everyone should have the opportunity to read and interpret the bible, to begin to organise. Wilson's book brings us a history of those who, often at risk of death, torture and imprisonment, struggled against the dominance of the existing church. On occasion these were mass outbreaks of rebellion, but more often they were networks of illegal, or semi-legal dissenters meeting, reading and writing pamphlets and discussing ideas. A translated bible was often central to this.


in 1428 an informant deposed against Margery Baxter of Martham, Norfolk, that she 'secretly desired her, that she and Joan her main would come secretly, in the night, to her chamber, and there she should hear her husband read the law of Christ unto them, which law was written in a book that her husband was wont to read to her by night'.

This does not mean that all religious dissenters were revolutionary. Far from it. In fact Derek Wilson makes it clear that "no Lollards were revolutionaries" when discussing those who came to follow the great religious dissenter Wycliffe. But by the reign of Henry VIII, change was coming and there was a battle on. Thomas More said that half the English population could read. Wilson argues this was an exaggeration, but that there would be few places were there wasn't someone who could read. The consequences were dangerous for the ruling class


For centuries English Christians had believed what they were told by their priests and bishops, largely because there was no other source of information... But now the battle for men's minds was on.

Growing numbers of English bibles were making their way into the country. Wilson documents the impressive network of merchants prepared to risk smuggling the version translated by Tyndale into the country. BY the late 1530s though, with Henry VIII needing to justify his position as head of the new church and undermine the link with Rome, an official translated bible was allowed.

The new availability of "god's word" meant that ordinary people could read it. Wilson describes the fascinating effects of this, as "gospellers" read allowed the bible to gathered listeners. This must have been extraordinary,


Often they chose to do this during mass, setting up a 'rival show' and sometimes drowning the mumblings of the priest in the sanctuary. William Maldon related how the poor men of Chelmsford came together on Sundays 'in the lower end of the church... to hear their reading of that glad and sweet tidings of the Gospel'

Once unleashed this was impossible to stop. In fact Henry did try. Eventually, so concerned was he with ordinary people reading the bible, that he banned the lower orders from doing so in 1543. In what Derek Wilson argues was perhaps the first attack on a granted freedom in history, only the rich could read the bible in English. But so rooted was the new religion among ordinary people this did not long last Henry's death and Wilson shows that even with the reign of Catholic Mary and her brutal suppression of Protestantism, Church leaders did not really try and remove English bibles from Churches.

Wilson is enthusiastic about the importance of a translated bible, seeing a close link between the "spiritual freedom brought by the English bible and the political freedom won by seventeenth-century parliamentarians". And "important step on the path to democracy" he calls it. He is probably accurate in this, though he over-extends this argument from the specific story of England by saying that  there are "very few Protestant countries in which totalitarian regimes have been tolerated for any length of time".

Nonetheless the importance of the English bible cannot be underestimated. It was a right that was fought for and defended by thousands of men and women who wanted the right to interpret and understand the dominant ideology of the world themselves. This could be, and frequently was, of revolutionary significance. While I might have minor disagreements with Wilson's emphasis on how important the bible was, this is a fascinating history that highlights the role of ordinary people in shaping their own world.

Siegel - The Meek and the Militant
Tawney - Religion and the Rise of Capitalism
Hoyle - The Pilgrimage of Grace
Posted by Resolute Reader at 4:44 pm

Seems he's a fairly prolific author - reckon any of his other stuff would be worth checking out as well? Or should a relatively "amateur" history enthusiast such as myself stick to Christopher Hill?

Oh, and it looks like it's been reprinted as "The People's Bible", for those people who want to read it.