Alexander Solzhenitsyn - One Day in the Life of Ivan Denisovich 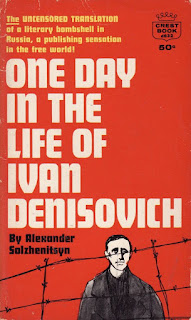 There's little to cheer the reader of Solzhenitsyn's account of a single day in a Soviet gulag. It's a stark, brutal tale of a daily struggle for existence that lives the reader with little hope and a grim sense of hopelessness. Solzhenitsyn's writing is tight and evocative. The detail he uses clearly draws heavily on personal experience, the rolling of a cigarette,


Eino got out a pouch embroidered with pink thread. He took from it a pinch of factory-cut tobacco, put it on Shukhov's pal, sized it up, and added a few wisps. Just enough for one roll-up, not a scrap more. Shukhov had newspaper of his own. He tore a bit off, rolled his cigarette, picked up a hot ember that had landed between the foreman's feet, took a long drag, another long drag and felt a sort of dizziness all over hi body, as though drink had gone to his head and his legs.

The casual treatment of the lack of basics, newspaper instead of rolling papers, and the concern over wisps of tobacco tells us everything we need to know about inmates lives. Shortages of tobacco products are mirrored by the constant quest for food, and more food. The central character declares the day a good one, at the end of the novel, mostly because he'd got himself a couple of extra bites of food.

But shortages are nothing compared to the hard work in appalling conditions, and the casual violence for rule-breaking. The isolation, the physical punishment and the bullying of the guards, means making it to the end of the sentence is hard enough. But the real punch in the stomach is the realisation that this is simply one day, in thousands for Ivan Denisovich and his fellow inmates.

The power of One Day is its expose of the reality of the prison camp. Solzhenitsyn's saying little here about why those camps exist, though we get insights into the changes that have taken place in Soviet society. From revolutionary optimism, to the brutal dictatorship of the Stalin era that still uses the language of socialism to justify its rule. One Day caused a shock when first published, alerting the world to the reality of what many knew was taking place.

My edition has a terrible introduction by one John Bayley which seeks to use the novel as a denunciation of all things socialist. While Solzhenitsyn may have had that in his mind as well, this is far from a crude propaganda tract. It's an honest account of what happens when revolutions are destroyed, not an argument against changing the world.
Posted by Resolute Reader at 8:14 am