Judith Orr's new book is an answer to a conundrum. As she asks on the very first page, 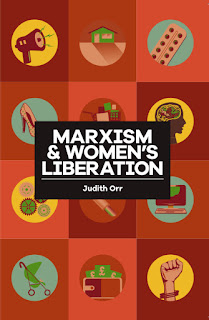 Why are women, half the human race, still discriminated against?... Women on average earn around 18 percent less than men. Britain has fallen out of the top 20 countries for gender pay parity because the gap between men's and women's incomes is so wide. The latest economic crisis... has hit working class women the hardest.... The sexual freedom we though had been won in the struggles of the 1960s appears to have just given us the opportunity to be even more crudely defined as sex objects than ever before.

Explaining why it is, that in every country in the world women are systematically under-represented in public and private bodies, paid less, worked harder and objectified, leads Orr to examine the nature of our society and to explain why sexism is central to capitalist society. In doing so, she challenges those who say sexism is caused simply by the sexism of men, or that it has always existed. Marxists argue that oppression has not always existed, and in an excellent early chapter Orr looks at the way that for most of human history women have not been systematically oppressed.


today women are seen as mainly responsible for rearing the next generation in the family and looking after the sick and elderly, even though their role in society is much more than this. But this hasn't always been so. Different forms of the family may reproduce the oldest oppression but it is still a relatively modern development... for 90 percent of human history there were no hierarchies and no systematic oppression.

The importance of this analysis is, as Orr points out, that "oppression is not an inevitable product of human nature" and thus we can imagine and fight for a future without oppression too.

The emphasis on the family in the above quote is important, because the family (in all the forms it has taken) is central to the ongoing existence of women's oppression. Orr quotes from a classic piece by the British Marxist Chris Harman who explained that capitalism creates and uses the family, but it is not the sole aim of the capitalist system. "[Capitalism] has only one driving force - the exploitation of workers in order to accumulate. The family, like religion, the monarchy etc, is only of use to capitalism in so far as it helps this goal." How it helps is two fold. Firstly there is the economic question. Just the "informal" care of the sick and disabled by their family saves the British government £119 billion yearly. Orr quotes David Cameron being open about this when he said "[the family] is the best welfare state we ever had".

Then there is the ideological role of the family. This teaches us to live in small units, to be self-sufficient, to expect little from the state, and to do it for ourselves. As another Tory PM Margaret Thatcher said "There's no such thing as society. There are individual men and women and there are families. And no government can do anything except through people, and people must look after themselves first." This also helps explain another aspect of capitalism - the way that the existence of the family helps to solidify a particular set of relationship as the norm. LGBT people are stigmatized because they are "different" to the supposedly normal family.

Yet these realities are constantly changing. Men and women struggle for changes. Laws to maintain the family are challenged. Abortion rights were won, helping to free women from the dangers of backstreet abortions, and in turn those rights were defended. LGBT people fighting together with straight people have won more rights, in the face of opposition from governments around the globe.

Another central strand to Orr's book is this emphasis on struggle. In particular she examines the mass movements that have fought for key gains for women. The struggle for the vote, the battle for abortion rights, equal pay rights and so on. In examining the Second Wave of the Women's movement, Orr makes a very important observation.


The early 1970s [in Britain] was a period of mass working class struggle. This included two national miner's strikes, a national docker's strike and more than 200 factory occupations. So although the women's movement in Britain was inspired by the Women's Liberation Movement in the US it was built in different circumstances, which included the presence of a stronger revolutionary left and a better rooted and organised labour and trade union movement. This backdrop shaped the dominant ideas and debates of the WLM in Britain. it also shaped the activity of newly politicised women. The campaigns they organised often reflected the demands and needs of working class women - equality at work, equal pay, maternity benefits.

This experience helped to make the demands of the women's movement part of those of the working class movement. That the TUC organised a mass protest, attended by tens of thousands of women and men against a Tory attack on abortion rights in 1979 was one brilliant expression of this.

Because Orr begins her explanation of women's oppression by examining the question of capitalism, a class analysis is central to her strategy for fighting for liberation. This is where Orr disagrees with many feminists, arguing that patriarchy theory misunderstands the origins of women's oppression and directs the movement down a blind alley.

This is why Orr can point to the way that at the high points of class struggle, in particular the early years of the Russian Revolution, working people won gains that showed the potential for an entirely different way of organising society. After the Russian Revolution abortion was a legal right, women played a full role in the democracy in society, child care, food and laundry was collectively organised, removing the burden from women in a society that had been incredibly backward. These achievements did not survive Stalin's rise to power, but Lenin could rightly celebrate in 1918


Take the position of women. In this field, not a single democratic party in the world, not even in the most advanced bourgeois republic has done in decades so much as a hundredth part of what we did in our very first year in power.... We really razed to the ground the infamous laws placing women in a position of inequality, restricting divorce and surrounding it was disgusting formalities,,,, laws numerous survivals of which, to the shame of the bourgeoisie and of capitalism, are to be found in all civilised countries.

Judith Orr's book ends on the possibility of Revolution to truly liberate women. It is this emphasis that makes the book so inspiring, because it doesn't simply highlight what is wrong in society, but offers a way forward. There is much more that I haven't covered in this review. For instance, Orr looks at contemporary women's movements and discusses some of the ideas that have come out of academia such as intersectionality and privilege theory. She finds these wanting, downplaying as they do the question of class. I also found the section on the question of social reproduction and the debate on wages for housework very useful.

For socialists, radicals and activists today this is a superb book. Its accessible, but takes on big and important debates and questions. It will introduce a new generation to the importance of Marxism as a tool understanding the origins of oppression and how we can fight to build a world where women's oppression is a thing of the past.

Orr - Sexism and the System
Rowbotham - Hidden from History
Leacock - Myths of Male Dominance
Engels - Origins of the Family, Private Property and the State
Posted by Resolute Reader at 10:19 pm

Wow, this sounds really good! Onto my TBR it goes! Thanks for the great review!