Anthony Everitt - The First Emperor: Caesar Augustus and the Triumph of Rome 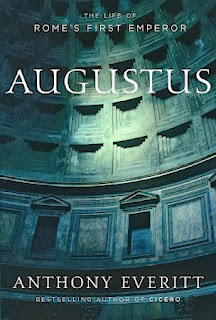 The fall of the Roman Republic and the rise of Imperial Rome remains the central story that underpins all attempts to understand later-day Roman history.

Anthony Everitt's biography has at its heart the individual who personifies the historical transformation. Octavian, the man who became Caesar Augustus, was adopted posthumously by his great uncle, Julius Caesar. His adopted name gave him enormous gravitas in the years immediately following Caesar's murder, as did the enormous wealth that came with it. But Octavian was not an outsider to wealth and privileged. This was no upstart from the fields, or slave made good, Octavian was a Roman, and he fought to ensure the continuation of Rome.

The story of Octavian and his transformation into Augustus brings into play many of the great figures of Roman history. There is of course Julius Caesar, and Augustus' great rival, Mark Anthony. There is also Cleopatra, and to a lesser extent other wives and mistresses. Everitt also introduces many of the poets who were part of Augustus' circle. Though occasionally I felt lack of material meant that Everitt strays a little from his topic, delighting, on occasion, in salubrious detail. (Did we really need that Horace poem on his wet dream)?

That aside this is a useful and readable account of the period. A nice summary of Anthony and Cleopatra; the stories of Augustus' limitations as a military commander and the genius of those (Agrippa in particular) who laid the basis for Rome's Empire.

Whether named Octavian or Augustus, the subject of this biography is far from the fair minded ruler that some later Emperors claimed to wish to emulate. He was ruthless and violent. Whether or not he had Cleopatra murdered as some suggest, he certainly made sure her heirs were killed. Octavian was given "a personality makeover" even while alive. Stories were spread to convince the rest of the world that "the young revolutionary whose career had been founded on illegality and violence a respectable, conservative pedigree."

At the core of this book is this notion of revolution. To what extent did Augustus revolutionise Rome? There is no doubt that both Augustus and the other two members of his Triumvir engaged in a vicious, brutal fight to ensure they gained power. The destruction of much of the old Roman ruling class and the absorption of their wealth and land into the new Roman state seems, on the surface, revolutionary. Yet there seems more continuity in other respects. Roman remained a society based on slavery, and its political institutions, at least at a senate and regional level seemed very similar. And there was little between Augustus and his main rival Anthony, as Everitt comments, the "choice was simply between two kinds of autocracy: tidy and efficient, or laid-back and rowdy."

The Marxist historian of Rome, Neil Faulkner, has a different analysis. Rather than the revolutionary Augustus, he sees a stabilising force:

"Caesar’s brief rule in 45 to 44 BC was also ‘absolutist’-it was, in effect, that of a military dictator governing against the opposition of much of the ruling class but with strong popular backing. Caesarism was a form of what Marxists call ‘Bonapartism’. It arises when a clash of class forces produces chronic instability but no clear outcome-when there is no revolutionary class able to seize power for itself and remodel society in its own image. In such circumstances, revolutionary leadership can be ‘deflected’-it may devolve on ‘strongmen’ who lift themselves above the warring factions, building support by promising popular reform and a restoration of order, and maintaining power by balancing between evenly matched class forces. Caesar, the imperialist warlord and popular reformer, provided ‘deflected’ leadership to the Roman Revolution, and, once in power, ‘Bonapartist’ leadership to the fractured Roman state. His immediate successor, Octavian-Augustus (30 BC to AD 14), who became the first emperor, led a conservative reaction which largely restored the unity of a Roman ruling class that was now purged, enlarged and more open to recruitment from below. It was this that distinguished Caesar from Augustus, not that one was a democrat and the other an absolutist."

The "Roman Revolution" had begun some years earlier and Augustus was, in large part, consolidating earlier change. But it was less a revolution and more, in Faulkner's words, of "a struggle between aristocratic factions over the future of empire". By strengthening the Roman state, expanding and developing it, Augustus was making it into the system that could govern most of the known world. In this context Augustus was less of a revolutionary and more the figure who ensured that change became permanent.

It might be suggested that this is a minor part of Everitt's book. But it does get to the heart of who Augustus was. While much of the biography is readable and fascinating and an excellent introduction to Roman history, I felt the core argument lacked strength and undermined the viability of the whole work. That said, this is a complicated period that has challenged all those who have tried to understand those turbulent Roman years. While I don't agree with all of Everitt's conclusions, his book is an excellent introduction and will give readers a useful over-view of the subject.

Symes - The Roman Revolution
Parenti - The Assassination of Julius Caesar
Suetonius - The Twelve Caesars
Holland - Rubicon
Posted by Resolute Reader at 12:26 am