Tom Holland - Rubicon - The Triumph and Tragedy of the Roman Republic 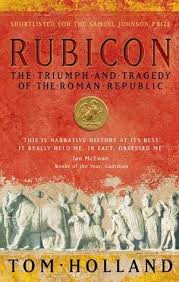 The Roman Republic was a mass of contradictions, on the one hand it preached democracy and the power of the ordinary voter, on the other, it's wealth and economy was based on slavery, and while everyone was free to vote - the rich and powerful could afford the time to take part in the political process, so some people's votes counted for more than others. Tom Hollands book mirrors these contradictions and creates some of it's own. This is perhaps obvious from the start with the choice of quotes Holland uses to open the first chapter.

"Human nature is universally imbued with a desire for liberty, and a hatred for servitude." Caeser, Gallic Wars

"Only a few prefer liberty - the majority seek nothing more than fair masters." Sallust, Histories

Unfortunately for Holland, who has attempted to write a modern introduction to the history of the decline of the Roman Republic, his book never gets ahead of the inherent problems in Roman society.

Much of our historical source material for those times is reliant on the stories of great men, written usually by other great men. Often these are very detailed - we know much of the speeches of famous orators like Cicero because they were noted at the time - but it can leave an impression of Roman history dominated by powerful individuals who seem almost magically able to create armies of soldiers and crowds of rioters out of thin air.

The history is also hampered by another problem - most of those who chronicalled anything to do with Roman history also thought that the most important factor was what was done by a few individuals - colouring their impressions and writings.

For instance, one thing that annoyed me was the way class as a division in Roman society runs all the way through the first half of the book, a real discussion of those classes and their make up is limited. For instance there is no real discusion of the hundreds of thousands of slaves who lived in the Roman empire, until the first major revolt is described.

Many of the key generals or figures in the Roman senate clearly represented different sections of Roman society (retired Soldiers for instance) and it's these factors that most of governed many of their decisions - rather than the long standing feuds and personal antagonisms that Holland favours. Indeed at times, this book feels abit like a soap opera of the ancients.

Nevertheless, there is much to recommend this book. It's entertaining, humourous and exciting in places. If you thought you knew Rome through visiting a few monuments or what you learnt in school then your eyes will be opened to the violence, cruelty and torture at the heart of this rigid society. Oh and the sexism. Roman women didn't get a look in, except to make babies.

So if you're looking for a clear analytical explanation of why the Roman republic fell from the heights of its powers, you will have to go elsewhere for further insights. But if you're looking for a brief introduction to the key features of Roman history, the importance (or over importance) of individuals and a general introduction to why there are Roman remains from Egypt to Scotland then you will get a lot out of this book, but read it, as it were, with your eyes open.