Marcus Rediker - Villains of all Nations: Atlantic Pirates in the Golden Age 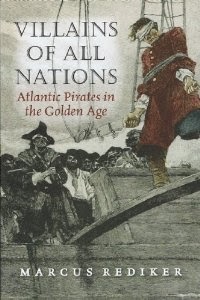 Two events occurred while reading this book made me ruminate on the endless fascination that we have for pirates. The first was the coincidence of reading  Treasure Island at the same time. A book that perhaps invented many of the cliches, yet is so much part of popular consciousness that I felt I knew it by heart despite never having read it. Secondly was being asked by a fellow train passenger for this book's ISBN because in his words, he loved sea novels and wanted to know the real history.

Oddly the real history is very different to that portrayed by R. L. Stevenson, or countless other pirate films, books and plays. As Rediker himself points out,

"Traditional explanations of why people turned to piracy have emphasized greed, and there is certainly truth to this. Many who worked the pirate ship wanted money, which as dispossessed proletarians they desperately needed to live. But the struggle for money is more complex than simple greed, as pirates themselves made clear. Money meant simply getting a living... It meant subsistence for poor families... It meant escaping the brutalities of life at sea 'as long as they lived'... They were now 'Gentlemen of ffortune'."

Pirate ships were, in the main, organised very differently to naval or merchant vessels. By and large instead of a near dictatorial, violent hierarchy, pirates organised more democratically. They elected their captains and unelected them if they behaved incorrectly (perhaps by displaying cowardice in the face of the enemy). They redistributed wealth, and frequently displayed kindness and honour towards captives. They were brutal in battle, but this is no surprise, they were treated violently by their previous captains and were unlikely to escape death if captured. Indeed the violence on non-pirate ships is a singularly important factor leading many to rebel, or join pirate crews.

The new social order on-board pirate ships that Rediker describes has its roots in necessity. A new crew in open rebellion requires self organisation. But Rediker suggests that the closeness of the radical events of the English Civil War meant that "when sailors encountered the deadly conditions of life at sea in the late seventeenth and early eighteenth centuries, they had an alternative social order within living memory."

This acute understanding of the realities of life was never far from the minds of the buccaneers. Pirate captain Charles Bellamy lectured a captured captain thus:

"damn ye, you are a sneaking puppy and so are all those who will submit to be governed by laws which rich men have made for their own security, for the cowardly whelps have not the courage otherwise to defend what they get by their knavery; but damn ye altogether: Damn them for a pack of crafty rascals, and you, who serve them, for a parcel of hen-hearted numskuls. They vilify us, the scoundrels do, when their is only this difference, they rob the poor under the cover of law, forsooth and we plunder the rich under the protection of our own courage."

Pirates organised themselves in egalitarian and democratic ways. They saw themselves as "honest men" trying to win justice for ordinary sailors. But this could not be left to stand. There were significant numbers of pirates and the various nation states organised to stop the destruction of commerce. This "cleansing of the ocean" meant the destruction of the pirates, but their popular acclaim inspired many tales and legends. Some of those have come down to us today, but the truth is far more inspiring and Marcus Rediker's fine history rescues it from Davy Jones' Locker.

Rediker - The Amistad Rebellion
Rediker - The Slave Ship
Rediker - Between the Devil and the Deep Blue Sea
Rediker & Linebaugh - The Many Headed Hydra
Posted by Resolute Reader at 8:47 pm