A S Jasper - A Hoxton Childhood 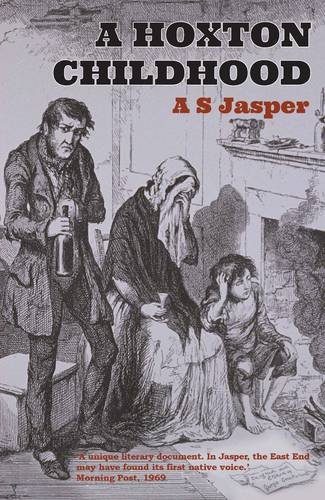 A S Jasper's memories of life in Hoxton in East London, in the first two decades of the twentieth century portray a life of poverty and suffering. Jasper's working class family suffered doubly; from the limits of East London's economy and a father who's semi-legal income mostly made its way behind the bars of the myriad of local pubs.

So this is a autobiography of a childhood blighted by poverty, unemployment, alcoholism and violence. The violence of individuals who took out their suffering on those around them, together with the violence of a system that turned people on the street for falling behind on their rent, or because their labour was no longer needed.

Unfortunately while Jasper's tale is illuminating in the reality of life for the majority of those living in East London, unlike other similar accounts, we learn little about social life. There certainly is no sense of the collective acts of resistance that marked out East London life, or the workers' organisations such as their left parties and trade unions. Perhaps this is because Jasper is remembering the earliest years of his life, but East London did have its share of struggles in the years described.

The arrival of World War One brings with it death and destruction. The fear of German Zeppelin raids and friends and family who joined up. Some, like Jasper's brother-in-law couldn't stand the army and got out as soon as they could desert. Others never returned. Leaving young families to fend for themselves.

Those interested in the lives of ordinary people will find this book interesting, but lacking in substance. Certainly nobody could believe that Eastenders between 1900 and 1920 lived a happy, but poor existence. In a postscript written in the 1960s, Jasper hopes that his readers will be thankful that these times of poverty are past. Sadly, as the economic crisis continues, and British governments pursue their austerity programmes, the safety net helping those in poverty, low pay and unemployment is getting thin. We can hope we avoid such times again, but its not automatic. Let's hope for some resistance before following generations have to live like Jasper's friends and family.
Posted by Resolute Reader at 4:14 pm