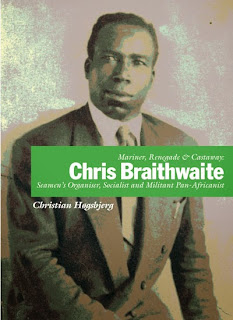 Subtitled Seamen's Organiser, Socialist and Militant Pan-Africanist this short new biography of Chris Braithwaite (known as Chris Jones) rescues a forgotten hero of the working class movement from relative obscurity. It is also a useful introduction to the politics of a period that saw the international Communist movement move from being a tribune of the oppressed peoples of the world, to an apologist for Stalin's Russia.

Braithwaite was born in Barbados. A seaman, he was widely travelled and after a time in New York he ended up, as so many inhabitants of British colonies did, in East London. There he rapidly became involved in the emerging movements that sought to organise seamen and the docks. In particular, Braithwaite tried to organise black seamen, who not only suffered the racism of the employers, but also that of their colleagues and on occasion, the Natonal Union of Seamen. His writings continually try to both organise workers, and build unity. In the appendices to this book, Høgsbjerg has collected a few of Jones' writings aimed at seamen, which give a flavour of this work. Here is Braithwaite/Jones writing in 1938:

"In the last issue of International African Opinion I appealed to ever colonial seaman to get into touch with the International African Service Bureau, which is willing to take up their grievances... I again repeat this appeal, and at the same time urge coloured seamen to take a greater interest in their union activities. For only through their organised might will they be able to mobilise the support of the white workers on their behalf."

Braithwaite, like many other radicals, became attracted to the Communist Party because of its principled anti-imperialism. Once the abandoned that position, Braithwaite, like many others, broke with Communism. But unlike many, Braithwaite didn't lose his radical socialism, speaking on platforms of the ILP and continuing to write for various journals. One memorable part of this book is a description of a meeting hosted to highlight the abuses in French Colonial Africa. This was the period of the "Popular Front" and Communist members at the time were being instructed to stop criticism of a government that their French party supported. As Communists heckled and accused the speaker who represented nationalist movements of Algeria, Tunisia and other French colonies, Braithwaite's powerful voice roared above the noise, "I'm with you, Boy" he encouraged the speaker.

The decline of maritime industry in Britain has no doubt helped lead to activists like Chris Braithwaite being forgotten. Alongside other recent works, such as the republishing of Madge Dresser's book on the Bristol Bus Boycott, Hassan Mahamdallie's pamphlet on Black British Rebels and the excellent, Say it Loud!, this book rescues those black activists who were often at the heart of working class struggles in Britain, fighting racism and winning workers to united action.

Richardson (ed) - Say it Loud! Marxism and the Fight Against Racism
Fryer - Staying Power: The History of Black People in Britain
Dresser - Black and White on the Buses: The 1963 Colour Bar Dispute in Bristol
Posted by Resolute Reader at 10:34 am