Heather Rogers - Green Gone Wrong: How Our Economy is Undermining the Environmental Revolution 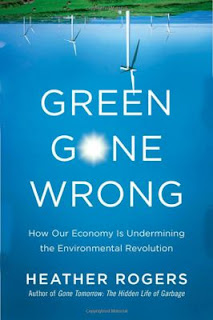 As the scientific reports on the reality of global warming grow ever more frightening, Heather Rogers' book Green Gone Wrong explores the myths and realities of the solutions that we are offered. Her starting point is that most people want to do something about climate change, to reduce their carbon footprint, and so she examines some of the options that we are given. Some of these, such as using a car that is more efficient, or powered by electricity, are limited she points out, partly by the cost of the vehicles. Being Green in this situation is the realm of the wealthy. However she also points out that there is a structural problem with the economics of cars and car companies that prevent low emissions, or more efficient cars becoming mainstream.

To explore this further she examines the ways that the automobile industry destroyed public transport in the US, by buying up the tram companies. In their quest for profits, they first ensured that the public had to rely on cars. Now, in a situation where most Americas need a car, they only sell ones that maximise their profits. Sadly these are not the ones that reduce fuel use, or run on sustainable energy supplies. The barrier is not technology - far better cars are the norm in Europe. The barrier is profits. Switching away from the large comfortable, fuel guzzlers that the advertisers have sold to the US market for so long, would reduce profits in the short term. That is something that the industry is not prepared to tolerate. So emissions continues to rise.

Surprisingly, there are parallels with agriculture. Consumers are told that buying organic, or buying Fair Trade items will improve the planet and the lives of those working the fields. Travelling around the US and South America, Rogers finds the reality is far from the glossy brochures. The image of organic foods being the realm of small farmers living on decent incomes is rarely true in the States. While often the food is far better, margins are tighter and overheads high. More importantly, the industry is squeezed by the big multinationals, who in the US as well as the rest of the Americas have reshaped agriculture, not to provide nutrition and decent food, but to maximise profits.

In South America, far from the eyes of almost any consumers, Rogers finds organic farming that is far from organic, with suppliers using pesticides and other chemicals. She explains the problems and limitations of the bodies that approve the logos, for organic or fair trade foods. Too few inspectors, open to bribery and shadowy business deals. She also finds farmers and indigenous people, who are lied to, promised the earth and stolen from. Many of these tales are tragic. She returns occasionally to the story of one group of indigenous people, the Dayaks, farming their ancestral lands, and often trying to prevent the logging of their forests. One group of Dayaks have confiscated chain saws from the loggers. In a misunderstanding of the scale and strength of their multinational foes, they clearly believe that the saws will form a bargaining chip that will enable them to protect their lands.

Despite what is on the label, Rogers concludes that in some cases, "Fair Trade status binds these growers to a single processor and trader because the cost of certification is so high. Despite how it may look from afar, the system meant to ensure ethical standards and ecological well-being can deal small farmers out from the start."

Conclusions like this point directly to the real enemy. As Roger's explains vested interests lobby to ensure that "control over greenhouse gas emissions [are left] to market forces." Saving the planet is only possible in this economic system, if it is profitable. And the efficiencies made, in reducing energy use, or emissions are, under the current way of organising society, channelled back, worsening the problem. Rogers' quotes an activist at the Land Institute:

"When the Wal-Marts of the world say they're going to put in different lightbulbs and get their trucks to get by on half the fuel, what are they going to do with that savings? They're going to open up another box store somewhere. It's just nuts."

Rogers avoids the trap that many environmentalists make of simply believing that consumers have the power to change things. She points the blame at an economic system that has the accumulation of wealth as its motor. While she doesn't dwell on the alternatives to this, she certainly finds the real enemy. Shopping is not the answer, because the products we buy are open to corruption and bribery, but also because shopping is part of that system, "we can vote with our wallets all we want, but the people with the most money - precisely those who lavishly benefit from a system built on ransacking nature - will inevitably control the most votes."

Rogers is a excellent and readable writer. He book is part travelogue and part critique of capitalism. As in her earlier work on capitalism's waste problem, Gone Tomorrow, she stops short of arguing that a democratically, planned economy can be the heart of the solution to the environmental crisis we face. Nonetheless, both books are a powerful read and a damning indicment of a system that'll destroy the planet in its quest for larger profits.

Last night I saw an advertisement in which a woman bragged that her American-made SUV could get "30 miles a gallon". I laughed, because what else can we do when confronted with such a pathetic display? Vehicles were getting 60 miles to the gallon a few decades ago.

This book reminds me a bit of what I've heard from "The Conundrum" by David Owen. I've only heard him interviewed, but the central idea of the book is that market efficiency only leads to more usage of a given product. That is, the more cheaply we can access gas, or burn electricity, the more we do so. We drive more, we leave the lights on, we leave the water running. Both books emphasize the need for us to think about not only what we're doing, but the ends we are working toward.

Yes, you're right. This is something that is know as as the Jevon's Paradox, named after the 19th Century economist who spotted that efficiencies didn't lead to savings, with the amount of coal used by steam engines. It's brought up to date in a number of essays by the US Marxist ecologist, John Bellamy Foster, with regard to the question of climate change.

In particular this one, "capitalism and the curse of energy efficiency" http://monthlyreview.org/2010/11/01/capitalism-and-the-curse-of-energy-efficiency

Reading this was both not surprising and but at times a complete eye-opener for me. The author deftly peels away the facade on those things currently touted as the way to save the environment, and shows us what they really mean for the people most directly affected by the carbon-trading schemes and organic food craze. She also outlines exactly why car companies aren't jumping to create a fleet of electric cars in a way that anyone can see has to do with profits and the bottom line, as well as the additional problem of the coal-fueled electricity that would power many of those that could be produced! After finishing it, however, I feared that it might be enough to leave some people reading it thinking it's all hopeless, and why should we bother since nothing available to me is actually helping the environment...which makes it a pity that the book doesn't discuss what –would– actually work to making the world a better, greener, healthier place.