E.E.Evans-Pritchard - The Nuer: A Description of the Modes of Livelihood and Political Institutions of a Nilotic People 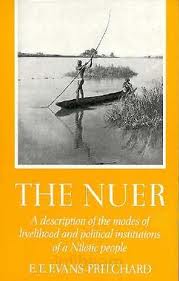 The Nuer of the Southern Sudan live in the country that borders the Nile river and other tributary rivers. Their life revolves around their cattle, which form both a major source of their food and a mainstay of their social interactions. They are also fishermen and farmers planting crops of millet on small islands that rise above the wider marsh.

Evans-Pritchard's book was first published in 1940 and is considered a classic of social anthropology. It is the first in a series of extensive studies of the Nuer made by the author. The very first chapter deals with his first visits to the area and the difficulties he has in positioning himself for these studies.

From Evans-Pritchard's descriptions, the Nuer in the 1930s seemed to practice a life that must have been very similar to that of the first agriculturalists. In fact their modes of organising society seem to be almost a bridge between what might be called a hunter-gatherer society and full, permanent agriculture.

This is particularly interesting because of the lack of class in their different communities. Class society could only come about when agricultural arrived as it was only then that there could be a surplus of food to support non-productive members of the population. But this was not immediate; there would have been plenty of transitory societies where agricultural was increasingly dominant but were the old, egalitarian, aspects hand not been lost.

This is described in great detail in this study. As the blurb on the back puts it, the Nuer's "economic life is related to the absence of chieftainship and to their democratic sentiment."

This is not to say that the Nuer lived a life in perfect Utopia. Food shortages were common, war, feuds, adultery and occasional murder are part of their society. But this was based on very different attitudes to the world around them, and each other.

In part this is reflected in their attitudes to leadership. There are leaders, but they are not permanent ones whose every word must be obeyed. Evans-Pritchard describes the tut a "chief man of his family and joint family" who "takes the most prominent part in settling the affairs of these groups, but he cannot ... be said to have political authority... A joint family decide on the advice of their tut to change camp... but other joint families decide not to move till another day. Leadership in a local community consists of an influential man deciding to do something and the people of other hamlets following suit at their convenience."

Much of this book is spent in great, perhaps labourious, detail exploring the particular lines of kinship, the particular way that feuds and social relations are followed through. Most of this is only going to be of interest to the student of anthropology, though for the lay reader, nuggets continually shine through. I was struck by the authors explanation of the way that the Nuer have an entirely different conception of time. For them there are more spacings of time in the morning, when they are busiest looking after cattle than in the afternoon. Because of the lack of written records their history never grows beyond a few memorable generations. Evans-Pritchard points out that for the Nuer, the "distance between the beginning of the world and the present day remains unalterable" and was shown the tree under which humans came into being.

Private property played a different role for the Nuer. To them, cattle were everything, they enabled someone to get married, to atone for crimes to help a family member setup home. But the accumulation of cattle was meaningless. Once a Nuer male had enough cattle he would marry again or pass them on. Nuer would, it is true, get more than they needed of certain things, such as good fishing spears. But these would be taken from them by people who needed them and no crime was ascribed. Strict protocols governed the Nuer's life. "I have never heard of a Nuer stealing a cow from a fellow tribesman merely because he wanted one" points out Evans-Pritchard. Though the Nuer were perfectly happy to steal from a neighboring tribe.

One thing that struck me about the descriptions of Nuer life was the lack of discussion about the role of women. All the examples quoted above were based on the authors conversations with men, and it is clear from examples in the book to do with marriage, that women had a subordinate role in Nuer society. It is possible that this topic is covered in more detail in the later volumes of Evans-Pritchard's work. Clear divisions of labour existed in Nuer life. But often these were not based on sex, but on age groups. Age groups played a much more important role in Nuer society, though the examples of Age-Sets given in the final chapter here, are all about men. It would be illuminating to read further on this question.

I could write much more, but I would rather encourage people to read further. In summary, what Evans-Pritchard's detailed studies show, is that people who have different modes of production have different social organisation which consequently shapes different ideas in peoples heads. Trying to get the heads around these ideas, is very difficult for those who view from outside. This is why it is so wrong to described pre-capitalist, or even pre-class modes of production as "primative". They're anything but. It is for this reason that the author spends so much time looking at the details of inter-tribal relations and the like. But for most of us, we can simply delight in reading about a different way of organising society, not because we want to return to such a way of living, but because it shows that human-nature is not fixed and may well change again.

Evans-Pritchard - Kinship and Family amongst the Nuer
Burke-Leacock - Myths of Male Dominance
Posted by Resolute Reader at 10:00 pm

Fascinating - particularly the idea that their history has always been condensed to a story that forgets the centuries between the recent past and the beginning of human society. It's a refreshing alternative to our self-congratulatory grand narrative of relentless progress.