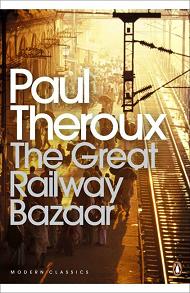 Paul Theroux's rail journeys are never less than epic. In this trip from the early 1970s, he leaves London one day, famously stating that he has "seldom heard a train go by and not wished I was on it". He evokes a desire to see the remote and unusual, to meet new people and explore a world that isn't yours.

But, increasingly I found that Theroux's descriptions were less those of an awe inspired traveller conveying the excitement of new places and more those of a cynic, coloured by not a little with belief in western superiority.

But the journey itself is amazing, London, Paris, Milan to Belgrade is epic enough. But then on to Ankara, Teheran, skipping Afghanistan by plane, he visits India from top to bottom, Burma, and Thailand (using planes to travel between countries) then a fascinating journey on a vanished railway through a Vietnam still torn by war. Plane to Japan allows Theroux to riff rather to much on the strangeness he perceives in the Japanese, finally he takes the long road home, the Trans Siberian Express through a northern USSR, strangely open and inviting to Western visitors.

But it is Theroux's style that is painful. His wonderful descriptions often lapse into some comment that seems deliberately designed to denigrate an entire people:


The Japanese are marvellous packagers of merchandise. These souvenirs are crammed in  the plastic shopping bags that form the basis of the Japanese traveller's luggage. And there are other parcels, for the nobori-san, not trusting the food on Japanese National Railways, brings his own lunch pail. When he wakes, he rummages at his feet and discovers a sealed tin of rice and fish that, without stretching or rising from his padded armchair, he eats, blowing and smacking.

When not dismissing entire cultures, there are moments of genuine passion and interest. I was taken by the number of times that Vietnamese women offered Theroux their young blond haired children, one of the legacy's of the US's ongoing presence in the country. But all in all, this enormous journey cannot really be comprehended in such a short trip. Towards the end of his journey in Japan, Theroux himself becomes exhausted by the changing places and times, entering a brief depression fueled by alcohol, he meditates on how aimless it seems. But that is not surprising, train travel is inevitably punctuated by destinations, but if your business is travel, the destinations become less important and a book written about them, will have the feel of a disjointed collection of anecdotes. Which is, perhaps, a fitting summary of these early writings.

I listened to this book (on a cassette tape) some 13 years ago or so, and cannot for the life of me remember much of the narrative in detail or about Theroux's musings on the journey or about the people and places he encountered, for that matter. I do remember that I enjoyed it a great deal because in many ways it managed to mitigate the boredom of my daily commute to work. I did notice, however, as well as you have, Theroux's condescending attitude and remarks about the people and their cultures. According to the wiki, he lived in Uganda and Malawi and taught there for some time as well. One can speculate that he may have carried his preconceived notions and prejudice about the Other, the Third World, and other "inferior" cultures not as learned or advanced as his own.

The murkiness of the of bourgeois' way of thinking does not allow them to see past their arrogance. Be that as it may, it is still informative and enjoyable travel writing. On a related note: I've read and heard so much about V.S. Naipaul, but have never actually read any of his novels or nonfiction writings. Another reactionary snob, you might, and you'd be right for saying so. I've just recently started reading Orwell's 1984. I'm almost certain you have read it also.

It's been a pleasure. Read on!