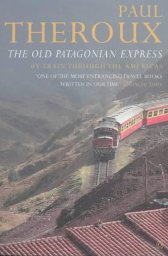 A few months back I reviewed Paul Theroux’s book about travelling from Cairo to Cape town overland – “Dark Star Safari”, since I enjoyed it so much I took this much earlier book of his on holiday with me recently.

Much of what I thought about Theroux’s writing while reading the Africa book is true of this one, though he clearly has developed as a writer and commentator since the 1970s! Indeed, some of the best aspects of Theroux’s commentary is readily evident when describing his travels through central and Southern America – if anything his wit and cynicism were tougher.

The 1970s must have been an interesting time to travel in South America – the region was then, as now, an area of great interest to the USA, and its interventions in places like Chile had led to much blood being spilt. Unsurprisingly, the people that Theroux meets are very much caught up in the debates about democracy and dictatorship and one can’t help thinking that a similar trip today (from Boston in the USA to the tip of Argentina) would allow for even more debates about dictatorship and popular rule – particularly given current events in Brazil, Venuzala and Bolivia.

Sometimes I found Theroux a little to cynical and jaded though – his hated of tourists is there for everyone to see, clearly hating the few conversations he is forced to have. Though occasionally he meets someone he has great respect for. The one thing that I disliked more than anything though, was his disregard for the “locals”. This is not something I remembered from Dark Star Safari, though it seriously jars in this earlier book.

At one point he mocks a fellow traveller (a beef trader in Argentina) for only reading a comic book “Comics are for kids and illiterates” he wants to say. Later he meets a young man (though Theroux patronisingly calls him a “boy”) who has been serving on a merchant ship for two years. They discuss their travels and the sailor describes how much he disliked South Africa.

“Very pretty, but the society there is cruel. You won’t believe me, but they have signs here and there that say ‘Only for whites’ You won’t believe me…. Strange isn’t it And most of the people are black!” He reported this more in wonderment than in outrage, but he added that he did not approve.

Theroux (or rather the Theroux of the late 1970s) is mocking and patronising at this instinctive hated of racism and Apartheid. “I was encouraged that a Patagonian with no education could show such discernment” he writes.

Since racism is irrational and Apartheid was based on lies and violence, I’d be more surprised if a young man didn’t show a dislike for what he’d seen in South Africa, yet Theroux falls into the travellers’ trap of forgetting that a lack of book learning is not necessarily the same as ignorance.

On the whole though, such criticisms aside, Theroux is a good writer and a good companion for travel – his own instinctive dislike of imperialism and cynicism towards big business and governments places him a cut above other travel writers. I’d hate to share a train carriage with him (and no doubt he would resent my own presence) but his books are fine in my rucksack.

Good news, La Trochita, is back in service in Esquel: