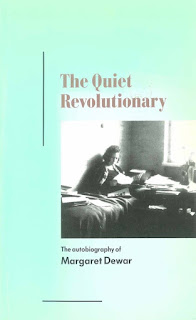 People make history but the people who do so are often forgotten. Everyone learns the names of generals or kings in history, or even those of dictators. But their soldiers, subjects and victims remain anonymous.

Margaret Dewar played barely a small role in history, yet her life charts some of the greatest events of the 20th century. If it wasn't for this autobiography, she would literally remain a footnote in a book. Yet her life was shaped by the forces of history and her documentation of them is worthy of re-reading. Born early in the 20th century in Russia, she came of a well to do German family. The first chapters are a fascinating story of a forgotten life in rural Russia - the warm memories of Christmas and Easter, the old traditions that seem quaint, yet have resonances today.

But there were great events on the horizon. Margaret lives through the Russian Revolution, moving to Moscow in the aftermath of the Civil War that was launched against the early Soviet power. Her recollections of hunger and rationing are her chief memories of those times. But she wasn't particularly political, though discussions about contemporary events were part of her life. She was more interested in music and learning the piano. What is fascinating are how the little events of life illuminate the wider situation - how trains would delay for days, or passengers would have to get off to cut firewood for fuel.

Seeking a better life, her stepfather flies with his family to Berlin in the early 1920s. With the hindsight we have, this is folly, but it must have seen an opportunity to good to miss, given their German nationality. Of course Germany in those years was seething with revolutionary struggle and the growth of counter-revolutionary fascist forces. Again concentrating on her dancing and music, most events are a backdrop, yet Margaret cannot avoid the politics - she comes across the Communist Party and becomes an activist. Admitting to finding it hard, she finds herself leading meetings and demonstrations.

Those of us active in left wing politics will recognise much of what she describes of those years - the meetings and debates, though she paints a picture of an organisation already stale with the grip of Stalinism. Members rarely read anything beyond official communist papers for instance and she doesn't feel she really can understand what is going on in the world, limited as her view is by the constraints of the needs of the party. There doesn't seem anything in the way of independent thought and action, rather the slavish following of a line. She and her comrades learn by rote to argue against Leon Trotsky's politics, even though none have them have read a word by him.

With the coming to power of Hitler the Communist Party melts away almost overnight. Margaret by then has visited Russia again as part of a delegation and has started to see through some of the rose-tinted images that have been painted. Eventually, questioned by the Gestapo, she flees overland (skiing some of the way) to the Czech Republic where she becomes deeper involved Trotskyist movement. From then, she travels to France and eventually Britain, meeting and marrying the Trotskyist activist Hugo Dewar (who wrote a history of the British Communist Party that I reviewed here). For the rest of her long life she and him work tirelessly to rebuild revolutionary organisation, becoming involved in the organisation that eventually becomes today's SWP.

Margaret Dewar's life is fascinating, not least because of the people she met - Clara Zetkin and Jan Frankel (Trotsky's secretary) for instance. But also for her descriptions of radical organisations and underground work. But mostly it is inspiring because it is the story of an ordinary woman caught up in extraordinary events who continues to struggle for a better world for her whole life.
Posted by Resolute Reader at 7:26 pm