Mike Gonzalez - The Ebb of the Pink Tide 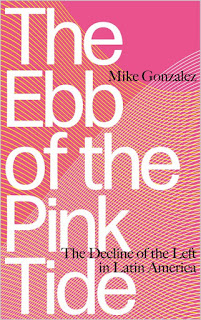 In the early years of the 21st century one of the inspirations for radicals in the anti-capitalist movement were events in Latin America. There a succession of left governments seemed to emerge out of economic and political chaos, on the back of, or buoyed by mass radical movements. The Zapitistas, the MST, Hugo Chavez, President Lula and in particular, revolutionary events in Bolivia seemed to offer real hope to millions of people. Mike Gonzalez emphasises however that these movements were the latest stage in a "relentless" struggle by the people of Latin America, one of which the outside world is "largely ignorant".

Today the picture is very different. We've seen the election of the far-right Bolsanaro in Brazil, the latest in repeated attempts by the United States and the Venezuelan capitalist class to undermine the legacy of Chavez's rule in that country. The "Pink Tide" is very much on the retreat as suggested by the title of Gonzalez's new book on the region. Gonzalez begins by tracing the origins of the movements that inspired us back in the 2000s. He is careful however, to make two crucial separations. First he doesn't suggest that all the governments and leaders that claimed the mantle of the pink tide were actually part of it. He notes, for instance, that


The example of Ecuador...illustrates... that the discourse of twenty-first century socialism and the pink tide slips easily off the tongue of eloquent and charismatic leaders like [Rafael] Correa. But the content of their actions belies the rhetoric.

Secondly he separates those left leaders like Lula and Chavez from the mass movements that both lifted them, and helped shape them. This I think is particularly important when we look at Venezuela. To many people around the world Chavez was an inspirational socialist leader and, in some ways he was. However Chavez was not originally a socialist, and while his reforms were significant steps forward for many of the poorest in that country, they did not originate from any attempt at fundamental transformation of society. Indeed, Chavez was not initially part of a mass movement - the revolutionary movement came when Chavez was threatened in a coupe by the Venezuelan capitalist order:


What was understood by revolution in the Venezuelan context?... if revolution is defined politically as the moment when the protagonist of revolution, its subject, becomes the mass of working people, then it can be descried as the sign of a profound political change. What happened on 12-13 April [2002] as the mass movement descended on the presidential palace demanding the return of Chavez, was such a sign. But that is all it was. The bosses' strike, and the attempt to sabotage the oil industry and bring down the Chavez government with it, deepened the class confrontation, and marked a second phase in the class struggle... it was the intervention of organised workers that ensured the continuity of production that was key to victory.

What workers did was to keep the system running in the face of a bosses strike that brought the economy to a temporary halt. But that was all. There was no real attempt to turn this into fundamental reorganisation of the workplaces under workers' control. The bodies that were set up were not bottom up democratic organisations. The problem, as has been argued elsewhere, was not too much socialism, but not enough. Gonzalez emphasises this:


in practice there is nowhere in the pink tide countries any evidence of the laying of the foundations of a new economic order. One possible framework would be buen vivir - but the realities appear to have flown in the face of any attempt to put it into practice.


Insofar as buen vivir reflected the accumulated experience of collective labour among indigenous peoples, or the protection of territories where that experience was embedded, the opposite developments seem to have occurred.

Gonzalez notes that at the highest points in struggle, in particular the revolutionary movements in Bolivia in 2003 to 2005, when millions of "peasants, workers, indigenous communities, men and women in urban and rural struggles, students, youth" came together in a movement that challenged directly capitalist power, there was the "absence of a common project for an alternative order, and alternative vision".

Unfortunately Gonzalez's book fails to spell out what this means. What I think he means is the lack of a mass revolutionary socialist party that could both shape and lead struggles, build the links between different movements and argue for that alternative vision. It is clear that in all the cases he examines such a party might have made a fundamental difference in pushing forward the interests of the workers and peasants. That need hasn't vanished, as Gonzalez notes, "Resistance continues, but this time, and increasingly, against the very states that the movements raised to power."

Gonzalez is very clear in his conclusion that the movements that emerged in Latin America failed, in part, because the "pink tide was a movement whose economic thinking was shaped by developmentalism" and points out "the future will pose the same problems again". The alternative is a socialist society created through the revolutionary overthrow of capitalism. Getting to that goal will require the building of new revolutionary organisations - a challenge for activists following the "ebb of the pink tide", but as Mike Gonzalez's book makes it clear, Latin America has no shortage of workers who have fought in the past and will fight again in the future.

Galeano - The Open Veins of Latin America
Sader & Silverstein - Without Fear of Being Happy
Sader - The New Mole
Galeano - Children of the Days: A Calendar of Human History
Posted by Resolute Reader at 7:22 pm